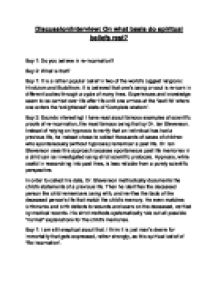 TOK IB IA presentation. On what basis do spiritual beliefs rest? I have read about famous examples of scientific proofs of re-incarnation, the most famous being that by Dr. Ian Stevenson.

Discussion/Interview: On what basis do spiritual beliefs rest? Boy 1: Do you believe in re-incarnation? Boy 2: What is that? Boy 1: It is a rather popular belief in two of the world's biggest religions: Hinduism and Buddhism. It is believed that one's being or soul is re-born in different bodies through a cycle of many lives. Experiences and knowledge seem to be carried over life after life until one arrives at the 'last life' where one enters the 'enlightened' state of 'Complete wisdom'. Boy 2: Sounds interesting! I have read about famous examples of scientific proofs of re-incarnation, the most famous being that by Dr. Ian Stevenson. Instead of relying on hypnosis to verify that an individual has had a previous life, he instead chose to collect thousands of cases of children who spontaneously (without hypnosis) remember a past life. Dr. Ian Stevenson uses this approach because spontaneous past life memories in a child can be investigated using strict scientific protocols. Hypnosis, while useful in researching into past lives, is less reliable from a purely scientific perspective. In order to collect his data, Dr. Stevenson methodically documents the child's statements of a previous life. Then he identifies the deceased person the child remembers being with, and verifies the facts of the deceased person's life that match the child's memory. ...read more.

happiness or peace, they might believe in it because they cannot think otherwise, they might even believe in it because their culture has been doing so for centuries. To tackle the second question, we first have to understand what is considered as 'knowledge'. In rationalism, there is something called 'A Priori Knowledge' i.e. 'Knowledge that is independent of experience' E.G - Mathematical proposition like 2+2=4 or things that are true by definition E.G - All bachelors are unmarried. Then there is second branch of knowledge which falls under the category of 'innate ideas' i.e. ideas or concepts that do not require any proof of experience because they are already present at the time of birth. So, for example, one of Descartes' arguments for the existence of God is that the idea is present in the mind from birth, left there almost as if an artist had signed his work or left a trademark. The third aspect of what can be considered as knowledge by rationalists is logical necessities i.e. things or situations that cannot be conceived of otherwise. E.G - In order to have three things, you have to have more than 2. Boy 1: So, let's look at the case of the children in the video where they are able to pinpoint exact locations where they were in the past lives and who their parents were and name them etc. ...read more.

No matter how vivid your experiences, for instance, they might simply be the product of a vivid dream, or of the deceptive influences of some malign force." This is a theme that science fiction in the last decade or so has had an especially fun time exploring, with great Cartesian movies such as The Matrix and Inception. However, this problem of the external world, as it is called, calls into question more than just whether our experiences accurately represent the external world-it calls into question the very existence of any external world at all. Perhaps, for all you know, your mind is the only thing that exists, and the surprising or seemingly out-of-your-control aspects of "the world" are just produced by your own unconscious mind. What possible evidence could disprove such a thesis, or even render it improbable? Boy 2: Wow!!! That is highly skeptical. Maybe the class has something to say. Can anyone help answer my partner here? Class Discussion ensues for the next 2 minutes. Boy 2: That was an interesting input from you all. I would like to continue further but I am afraid that we have come to end of our allotted time period for our presentation. Before we end our discussion, I would like to leave you a rather interesting re-incarnation account. Enjoy! http://www.youtube.com/watch?v=OWCUjx4nI98&feature=related ...read more.