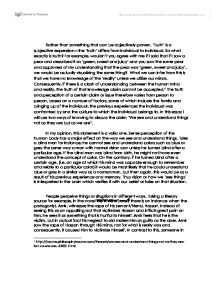 TOK. In this essay I will use two ways of knowing to discuss the claim We see and understand things not as they are but as we are.

Rather than something that can be objectively proven, 'Truth' is a subjective expression-the 'truth' differs from individual to individual. So what exactly is truth? For example, wouldn't you agree with me if I said that if I saw a pear and described it as 'green, sweet and juicy' and you saw the same pear and approved of my understanding that the pear was 'green, sweet and juicy', we would be actually visualizing the same thing? What we can infer from this is that we have no knowledge of the 'reality' unless we utilize our minds. Consequently, if there is a clash of understanding between the human mind and reality, the truth of that knowledge claim cannot be accepted.1 The truth and perception of a certain claim or issue therefore varies from person to person, based on a number of factors, some of which include the family and bringing up of the individual, the previous experiences the individual was confronted by and the culture to which the individual belongs to. In this essay I will use two ways of knowing to discuss the claim "We see and understand things not as they are but as we are". ...read more.

Despite her nudging him forward, he turned his head back around the whole time to hear the musician play his song. This action was repeated by several other children, but in all the cases, their parents forced them to move on. After those 45 minutes silence took over, and the man walked away. There was no applause, and nor was there any recognition. In those 45 minutes, only six individuals halted and stayed to listen for a while and approximately 20 dropped money into his hat while maintaining their normal pace. He collected $32. No one knew this, but the musician was Joshua Bell, one of the best musicians in the world, playing a violin worth 3.5 million dollars. This was a social experiment conducted by the Washington Post in order to study perceptions, tastes and priorities of people and to see whether we perceive beauty and whether we appreciate beauty and the talent of an unknown.2 One of the conclusions we can conjecture from this experiment is that we humans do not even have a moment to stop and listen to one of the best violinists in the world playing the best music ever written. Consequently, how much more are we losing out on? ...read more.

They do not give as much importance to the book as the Indians do; Americans consider it as a source of knowledge and nothing more. Since cultural traditions have taught Indians to believe this, they 'see and understand' a book in a different way than the Americans do, i.e. they see it as a symbol of God rather than just a source of knowledge. We humans have been created in such a way that we 'see and understand' reality the way our mind wants us to perceive it. The mind can choose what it wants to see, rather than see what actually exists, just the way a man in the desert sees a mirage. Our minds create illusions based on what we want to see or perceive. Going back to the fundamental basics of TOK, our senses do sometimes deceive, and consequently we make everything revolve around ourselves. Our cultures, past experiences and the ways in which we are brought up define us as individuals and make us who we are. It is because if this that we see and understand things not as they are but as WE are. 1 http://forums.philosophyforums.com/threads/we-see-and-understand-things-not-as-they-are-but-as-we-are--34251.html 2 http://www.ecademy.com/node.php?id=129899 3 http://findarticles.com/p/articles/mi_m1355/is_19_95/ai_54726311/ 4 http://findarticles.com/p/articles/mi_m1355/is_19_95/ai_54726311/ ?? ?? ?? ?? ...read more.