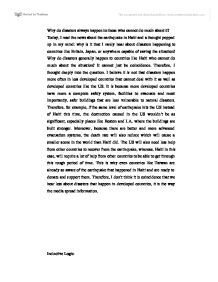 Why do disasters always happen to those who cannot do much about it? Today, I read the news about the earthquake in Haiti and a thought popped up in my mind: why is it that I rarely hear about disasters happening to countries like Britain, Japan, or anywhere capable of saving the situation? Why do disasters generally happen to countries like Haiti who cannot do much about the situation? It cannot just be coincidence. Therefore, I thought deeply into the question. I believe it is not that disasters happen more often in less developed countries that cannot deal with it as well as developed countries like the US. It is because more developed countries have more a complete safety system, facilities to evacuate and most importantly, safer buildings that are less vulnerable to natural disasters. Therefore, for example, if the same level of earthquake hits the US instead of Haiti this time, the destruction caused in the US wouldn't be as significant, especially places like Boston and LA, where the buildings are built stronger. Moreover, because there are better and more advanced evacuation systems, the death rate will also reduce which will cause a smaller scene in the world than Haiti did. ...read more.

This is possible now because of how much technology has advanced so much that we can accurately predict certain aspects of life that we can rely on, without being much off. What is beauty? Recently, I was talking to my parents about history of China, which I have absolutely no knowledge about whatsoever, I found out that in the past, Chinese people thought that the fatter (without being obese, of course) a girl is, the prettier or more attractive. This view has evidently died off now as it is apparent in fashion magazines, models, and celebrities, in that one of the biggest things they look for to look attractive is to be slim and without any fat. People nowadays, myself included, may be puzzled by why ancient Chinese people would find fat people attractive, as fat as possible in fact. Even to the point that they appointed one overweight lady (who they believed was extremely beautiful of course) to one of the four most beautiful women in the history of China. However, I think there is a reason to this, as there is to everything. ...read more.

Each question I believe has its own certain purpose, for example, I believe purpose of the question "you enjoy having a wide circle of acquaintances, yes or no" is to determine your openness to a social life. With each question having its own purpose, the test then pieces everything together to determine your personality, accurate to a very high extent. So accurate that I was, at some points, shocked at the results. I believe this ties in with inductive reasoning. This is because Myers Briggs probably studied the thought patterns and process of numerous human beings to come up with a pattern that fit "all" people. (But, of course, having studied TOK at TES, we know that no patterns fit everything.) After discovering a pattern, Myers Briggs uses the patterns to construct the questions and use our answers to determine our personalities. Why should I trust this knowledge? I shouldn't. But I do. That may seem ironic but looking at the results and comparing it to myself, it appears that a lot of what the analysis reflects my own personality. It's perplexing how much some 70 simple yes or no questions can tell a computer about me, but it happened so I believe it. ...read more.