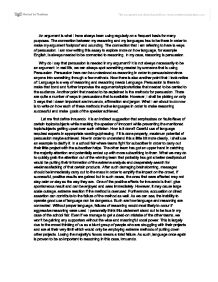 An argument is what I have always been using regularly on a frequent basis for many purposes. The connection between my reasoning and my languages has to be there in order to make my argument foolproof and sounding. The connection that I am referring to here is ways of persuasion. I am now writing this essay to explore more on how language, for example English, is always needed to be connected to reasoning. In my case, reasoning is persuasion. Why do I say that persuasion is needed in my argument? It is not always necessarily to be an argument. In real life, we can always spot something created by someone that is using Persuasion. Persuasion here can be understood as reasoning in order to persuade/convince anyone into something through a few methods. Now there is also another point that I took notice of: Language is a way of reasoning and reasoning needs Language .Persuasion is there to make that bond and further improvise the arguments/topics/articles that needed to be carried to the audience. Another point that needed to be explained is the methods for persuasion. There are quite a number of ways in persuasions that is available. However, I shall be picking on only 3 ways that I deem important are innuendo, affirmation and jargon. ...read more.

First impression is always known for its impact for each and every one of us. It stands believed to be our very first thought that gets to our mind, creating a base for our mind so that we then might come up with a way to react to it. As such, catchy language, slogans are needed in order to make this method of reasoning works. People who have certain liking for catchy slogans, key words can easily buy into the account. If you managed to get a grip on other's attention through your short sentences, you have already succeeded. That is how effective language can be. An everyday example of this is advertisement: Short title, striking language from an advertisement that gives us the urge to do as it says. Another effective use of language that remains a strong connection between it and reasoning is the method of conveying the messages: repetition through different phrasing. In quite a contrary fashion, this method does not have anything to do with short languages that I explained above. It all got about repetition again and again. Thus, the vital role that language play is to keep the audience constantly entertained and bought into our account. ...read more.

Through Plato test of truth, belief was already the first stage. Combining with the information provided by the speaker which has got to do with science and math works, certainly, any advertisement would be justified. However, the sources of biasness also came from those given information as well. There is no clear response onto how truthful that information is. A negative effect for this is the factual differences. Bombastic words may create misunderstanding due to the differences in knowledge background of vocabulary words. Thus, careful use of language is always appreciated and maximized. The connection between language and reasoning here is all about whether the given information was relevant or making sense to the audience. Once it plugged into the right minds, reasoning that is supported with famous and proven scientific wordings (usually provided by advertisement) would be always believed and remain successful. In conclusion, ways of persuasion till today remains one of those most important engines in our life in order to get people into your side of the story. However, coming clear to it, Language and reasoning is the two major elements that was being discusses used. Without proper languages, nothing can be understood. Without proper reasoning and evidences, no belief would be formed. The connection has to be there and remain intact in order to achieve success and get your argument accepted. ...read more.