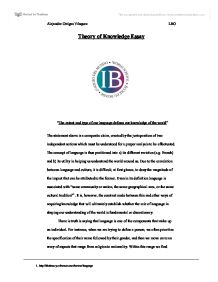 ToK Language Essay. The extent and type of our language defines our knowledge of the world

Theory of Knowledge Essay "The extent and type of our language defines our knowledge of the world" The statement above is a composite claim, created by the juxtaposition of two independent notions which must be understood for a proper analysis to be effectuated. The concept of language is thus partitioned into a) its different varieties (e.g. French) and b) its utility in helping us understand the world around us. Due to the correlation between language and culture, it is difficult, at first glance, to deny the magnitude of the impact that can be attributed to the former. Even in its definition language is associated with "same community or nation, the same geographical area, or the same cultural tradition"1. It is, however, the contrast made between this and other ways of acquiring knowledge that will ultimately establish whether the role of language in shaping our understanding of the world is fundamental or discretionary. There is truth is saying that language is one of the components that make up an individual. For instance, when we are trying to define a person, we often prioritize the specification of their name followed by their gender, and then we move on to an array of aspects that range from religion to nationality. ...read more.

Then there are also the strengths and limitations of language as a way of knowing. The four official ways of knowing that are taught in the IB are sense perception, reason, emotion and language5. A functional way of approaching them and their relative role in defining our knowledge of the world is by a systematic study of human evolution. If we consider Darwin's theory beyond the technicality that deems it pseudoscientific6, we can interlink the dependence of the human race on each of the ways of knowing. For one, the human race began with the same cognitive capacity as any other animal. Like them, we relied only on sense perception to obtain the information that would shape our view of the world. Nonetheless, over time we developed a liking for tool usage. It is known that to even consider using a tool one must have the ability to reason, even if it is only to the most basic extent. However, since we know that other animals such as chimpanzees and gorillas also use tools, we cannot yet begin to speak of humanity as we know it. It was not until our brains were developed enough to be able to generate emotions that we could speak of human society and of human culture, accordingly. ...read more.

Thus, not only would this contradict Universal Grammar, since saying 'left' and 'right' is proven to be words that define our concept of space (an vital element of our view of the world), but it would also mean that anyone that hadn't been born into a society that uses the cardinal points in this way would not be able to communicate with the members of said society. Without communication, one cannot understand the culture. Hence, one can never view the world in the same way. In other words, our language type can be limiting. In conclusion, language is the evolved offspring of the communion between our reason and our emotion. It was created simply out of both need and utility, since it is easier and only possible to express more complex ideas through it. It is also self-limiting because of this, since when something is created out of utility it is dependant on the needs of a society which are in turn dependent on a large number of environmental factors such as geographical location or climate. This creates situations such as the one seen when discussing Guugu Yimithirr, where the language depended on the individual knowing the cardinal points, a resource that transcends their linguistic capacity. Language is limiting; hence, its extent and type defines our knowledge of the world. ...read more.