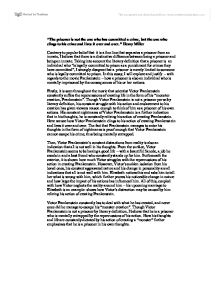 All of this, coupled with how Victor neglects the reality around him - his upcoming marriage to Elizabeth is an example- shows how Victor's distraction may be caused by him reliving his action of creating Frankenstein. Victor Frankenstein constantly has to deal with what he has created, and never once did he manage to escape his "monster creation". Though Victor Frankenstein is not a prisoner by literary definition, I believe that he is a prisoner who is mentally entrapped by the repercussions of his action. How his thoughts and life are constantly dictated by his action of creating a "monster" further emphasizes that he is a prisoner in his own thoughts. ...read more.