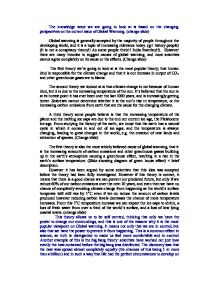 The knowledge issue we are going to look at is based on the changing perspectives on the current issue of Global Warming. (change slide) Global warming is generally accepted by the majority of people throughout the developing world, and it is a topic of increasing relevance today. (grr history people) (It is not a conspiracy theory!! As some people think!! India Fearnley!!). However there are many theories to suggest causes of global warming, and most scientists cannot agree completely on its cause or the effects. (Change slide) The first theory we're going to look at is the most popular theory; that human kind is responsible for the climate change and that it is our increase in output of CO2 and other greenhouse gases are to blame. The second theory we looked at is that climate change is not because of human kind, but it is due to the increasing temperature of the sun. It's believed that the sun is at its hottest point it has ever been over the last 1000 years, and is increasingly getting hotter. Scientists cannot determine whether it is the sun's rise in temperature, or the increasing carbon emissions from earth that are the cause for the changing climate. A third theory some people believe is that the increasing temperature of the planet and the melting ice caps are due to the end our current ice age, the Pleistocene ice age. From studying the history of the earth, we know that the earth has a natural cycle in which it comes in and out of ice ages, and the temperature is always changing, leading to great changes in the world, e.g. the creation of new lands and extinction of species. (Change slide) The first theory is also the most widely believed cause of global warming, that it is the increasing amounts of carbon emissions and other greenhouse gasses building up in the earth's atmosphere causing a greenhouse effect, resulting in a rise in the earth's surface temperature. ...read more.

Although, this is also a side effect of any global warming theory as they all result in the rise in sea levels. The disappearance of the ice sheets over the artic will also make the Gulf Stream disappear, the Gulf Stream is important as it brings warm water up from the Tropics giving Europe its temperate climate. This will also result from any of the global warming theories but it is most relevant to this theory as it suggests the melting of the glaciers is a cause, rather than an effect, of global warming. (change slide This theory is more popular than the sun causing climate change; however, it still has similar issues to the sun theory. It takes the focus off us, and places the fate of our earth in other hands. The issue of selective truth and different perspectives on a subject has an effect in all areas of knowledge, for example history. History is written by the winners, meaning that the losing countries or empires may have had very different views and it may be the case that truths have been stretched out of proportion, or even completely ignored. So the question we are left with is how do we know what to believe? And the answer isn't very satisfying. In reality we cannot be everywhere at once to watch for bias in experiments; to be able to accurately tell what year a war finished we would have to be there to witness it. Realistically we don't even know to what extent the 'truth' is exaggerated in a tabloid newspaper. The result is that we rely on global sources of information to obtain understanding and hopefully to gain some truth. The Internet, the television, newspapers, radio, and books are all widely used sources that, when cross-referenced, can give us a good idea of the events both now and in the past. However, there is STILL bias in these sources, just as there is bias when asking a person about these things. ...read more.

The media also has an influence in what we believe because it exploits some ideas more than others. The more "comfortable" theories and narrow mindedness can often cause our perception of truth to blur. Fear can also so play on our emotions, as fear has a large influence on our actions and beliefs. The idea that the end of the world, as we know it, is nigh is, in reality, a terrifying idea. That fact there is nothing we can do about it is even scarier. Blame can be a way of softening the condemned future, as if we blame ourselves, from using too much CO2, climate change is a lot easier to accept. By blaming ourselves it is easier to say "I don't care" and we can say it's our fault and we will get what we deserve. But to say it is actually the sun's ever increasing temperature and the result of the recession of an ice age, is scary and leaves us with a sense of helplessness and a loss of hope. Just because there is "proof" for a theory doesn't necessarily mean it is true. If you correlate the number of crimes and the number of policemen in a number of towns, and crime increases as does the number of policemen, does it mean it is the increased number of policemen that cause the extra crime? No. Just because there is a relationship between two sets of data, doesn't mean they are directly related. Therefore just because temperature increases as does the amount of CO2 emissions, doesn't prove it is actually the increase in CO2 which is causing the temperature rise. Despite the fact we aren't certain of what is causing global warming, there is strong evidence to suggest that the climate is getting warmer and that there is no escaping some climate change. It is inescapably clear that this is happening, however the reason and our part in it is not clear. ...read more.