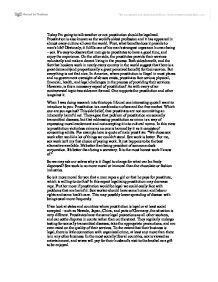 Today I'm going to talk weather or not prostitution should be legalized. Prostitution is also known as the world's oldest profession and it has appeared in almost every culture all over the world. First, what benefits does it provide to man's life? Obviously, it fulfills one of his man's strongest urges as a human being - sex. It's easy to observe that men go to prostitutes to have a good time, and enjoy the experience. On the other side, the prostitutes provide their services voluntarily and make a decent living in the process. Both sides benefit, and the fact that hookers work in nearly every country in the world suggest that there is a great demand (and proportionally a great perceived benefit) for their service. But everything is not that nice. In America, where prostitution is illegal in most places and no government oversight of abuses exists, prostitutes face serious physical, financial, health, and legal challenges in the process of providing their services. ...read more.

Sex work is better. For me, sex work isn't my first choice of paying work. It just happens to be the best alternative available. It's better than being president of someone else's corporation. It's better than being a secretary. It is the most honest work I know of." So we may ask our selves why is it illegal to charge for what can be freely dispensed? Sex work is no more moral or immoral than the chocolate or fashion industries. So is it more moral for you that a man rapes a girl or that he pays for prostitute, which is willing to do this? In this aspect legalizing prostitution may decrease rape. Further more if prostitution would be legal we could easily face with problems that are harmful. Sex worker should have same human and labour rights and same health care. ...read more.

We can find many police reports about how people have been tricked that they will get a job and nationality but at the end they become sex slave workers a property of a PIMP. Prostitutes also often become victims of violence. So in this perspective is prostitution totally immoral and not ethically. For religion prostitution is institution of evil. It has been a major reason of continuing downfall of the Christian Religion. Moreover, even if prostitute is tested for sexually transmitted diseases every week, she will test negative for at least the first 4-6 weeks, possibly up to 12 weeks after being infected. As a result of this while test is becoming positive and results are known, prostitute may infect 630 clients with HIV. This is under best circumstances with testing every week over one month period. It also assumes that the prostitute will quit working as soon as she or he finds out that test is positive, which is in my opinion highly unlikely. ...read more.