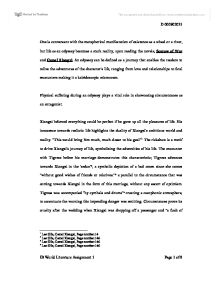 One is conversant with the metaphorical manifestation of existence as a wheel or a river, but life as an odyssey becomes a stark reality, upon reading the novels, Sorrow of War and Camel Xiangzi. An odyssey can be defined as a journey that enables the readers to relive the adventures of the character's life, ranging from love and relationships to fatal encounters making it a kaleidoscopic microcosm. Physical suffering during an odyssey plays a vital role in showcasing circumstances as an antagonist. Xiangzi believed everything could be perfect if he gave up all the pleasures of life. His innocence towards realistic life highlights the duality of Xiangzi's ambitious world and reality. "This would bring him much, much closer to his goal"1 The rickshaw is a motif to drive Xiangzi's journey of life, symbolizing the adversities of his life. The encounter with Tigress before his marriage demonstrates this characteristic; Tigress advances towards Xiangzi in the 'sedan'2, a symbolic depiction of a bad omen since she comes "without good wishes of friends or relatives."3 a parallel to the circumstance that was coming towards Xiangzi in the form of this marriage, without any escort of optimism. Tigress was accompanied "by cymbals and drums"4 creating a cacophonic atmosphere, to accentuate the warning this impending danger was emitting. Circumstances prove its cruelty after the wedding when Xiangzi was dropping off a passenger and "a flash of lightning far away made a bloody gash in the clouds."5 This imagery creates a concrete ...read more.

Nevertheless, a contrast between the two books is perceived, Xiangzi is highly weakened after the torment that circumstances put him through during the marriage, "smoking had become an addiction"16 "no longer cared about winning praise or fame."17 Whereas the train representing Kien and Phuong's lives, which had begun as innocent teenagers, metamorphosed as circumstances challenged them, and they emerged out as mature individuals at the culmination. Phuong ironically hardens as an individual, a negative trait, though it helps her go through the entire war, similarly Kien developed a "new found strength"18- an antithesis to Xiangzi. Odysseys bring to light a recurring pattern, reflecting the leitmotif present in the protagonist's life. In Camel Xiangzi, the odysseys follow a wave like pattern; during the journey after Xiangzi's capture by the soldiers, his "whole attention had been focused on climbing"19 and "he made out a distant plain."20 This representation of 'climbing' up and reverting down to the 'plain' epitomizes the wave- like construction and crashing of hope evident in Xiangzi's life. Ironically in this journey "he had followed the retreating soldiers"21, even though the soldiers were the reason for his disappointment, he forcefully had to follow the sole symbol of his harsh luck. It is a stark parallel to Xiangzi's destiny, which he had to follow knowing they would lead to negative consequences, which can be substantiated by the night he was lured into sleeping with Tigress, where he "sensed that there was something fishy in all this."22 Lao portrays ...read more.

His defragmented state of mind is revealed through his disturbed behavior with the mute girl, "Mistook her for certain ghosts"34 "He changed her name...from masculine to feminine."35 His survival is made torturous due to these memories but ironically his mind finds solace in them; portrayed when he says "I must write!"36 "To put my tormented soul finally to rest."37 Therefore taking into account these incidents, we observe that Kien's mind and life incorporates a defragmented sequence analogous to the pattern of the metaphorical flashbacks. However, Xiangzi gave up at the end, and succumbed to the 'dead end' that destiny put before him, which lead to a deterioration in his own character, "As long as he managed to keep himself alive, why think of anything else?"38 on the other hand Kien proved to be a hero in his own way, because he had the immense power in himself to carry on with his disoriented life, by living in the past memories of the war as a tool that helped him survive his present. Thus, readers witness the labyrinthine convolutions that life takes; the warp and weft of life is pre-conceived, and the pattern can be deciphered only at the culmination of the odyssey. Despite the shore receding away in the perilous sea, holding the will to live intact, itself, is a triumph; enlightening the readers with the universal truth that transience is the only constant in the world, and we must learn to move on steered by the indomitable human spirit. ...read more.