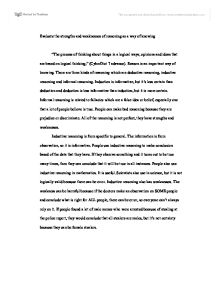 TOK reason as way of knowing

Evaluate the strengths and weaknesses of reasoning as a way of knowing "The process of thinking about things in a logical ways; opinions and ideas that are based on logical thinking," (CyberDict 7 advance). Reason is an important way of knowing. There are three kinds of reasoning which are deductive reasoning, inductive reasoning and informal reasoning. Induction is informative, but it's less certain than deduction and deduction is less informative than induction, but it is more certain. Informal reasoning is related to fallacies which are a false idea or belief, especially one that a lot of people believe is true. People can make bad reasoning because they are prejudice or discriminate. All of the reasoning is not perfect, they have strengths and weaknesses. Inductive reasoning is from specific to general. The information is from observation, so it is informative. People use inductive reasoning to make conclusion based of the data that they have. If they observe something and it turns out to be true many times, then they can conclude that it will be true in all instances. ...read more.

Overacker. Deductive reasoning is certain, but it isn't necessary need to be true to be certain, so this is its weakness. Logic is most useful when we begin with true premises; for if we then reason validly we can be sure that the conclusion is true. If people use deductive reasoning and follow every step correctly, the conclusion could be true or not true. It depends on the first premise. Your conclusions are only as good as your premises. Informal reasoning is the fallacies of both deductive and inductive reasoning. Fallacies are false ideas or beliefs, especially ones that a lot of people believe are true. This is very common in every day life. Informal reasoning is a normal logic, people use in regular argument. For example: This Thai restaurant is bad because the cook is Indian. People claim that something is true on the grounds that there is no evidence to disprove it. It means that the Thai food doesn't taste good because the cook is not Thai and there is no evidence to prove that this is wrong. ...read more.

One of them picks up the pearls and gives two to each of the other two, keeping the remaining three for himself. One of the other men says 'How come you have kept three?' 'Because I am the leader.' 'Oh. But how come you are the leader?' 'Because I have more pearls.'" It's keep proving. All reasoning has weaknesses and strengths. Deductive, inductive and informal reasoning all have weakness and strength to some extent. Deductive is more certain, but it is less informative. Even though it can have weakness, people use it in their daily life. Inductive reasoning is also very helpful, it based on the investigation or observation, but the observation is only with some people and they decide to use it for all people, so they can be mistake. Deductive reasoning also needs inductive reasoning because the first premise in deductive reasoning is from inductive reasoning. Informal reasoning is fallacy. It is also called false reasoning. It is a false idea that everyone believes is true. If everyone prejudice on some nationality, they will think that everyone from that nationality is bad. Sometimes people believe something is true because they can't prove to be false. ...read more.