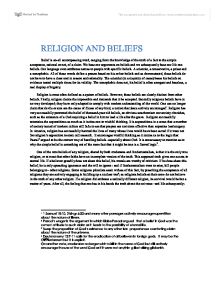 RELIGION AND BELIEFS Belief is an-all encompassing word, ranging from the knowledge of the truth of a fact to the simple acceptance, rational or not, of a claim. We base our arguments on beliefs and we subsequently base our life one beliefs. Our language even attributes names to people with specific beliefs. A scientist, a conservative, a priest and a xenophobic. All of these words define a person based on his or her beliefs and as demonstrated, these beliefs do not have to have a clear root in reason and rationality. The scientist (in a majority of cases) bases his beliefs on evidence tested multiple times for its validity. The xenophobic does not, his belief is often arrogant and baseless, a real display of bigotry. Religion is most often defined as a system of beliefs. However, these beliefs are clearly distinct from other beliefs. Firstly, religion claims the impossible and demands that it be accepted. Secondly religious beliefs have in no way developed; they have only adapted to comply with modern understanding of the world. One can no longer claim that devils or sins are the cause of illness of any kind, a notion that Jesus actively encouraged1. Religion has very successfully promoted the belief of thousand-year old beliefs, an obvious anachronism our society cherishes, such as the existence of a God requiring a belief in him to lead a life after the grave. ...read more.

We seem to emit too much respect towards the faithful; after-all, is it not the belief in a book claiming imaginable things about the nature of the universe that is a demonstration of virtue? Put this way no. Claiming that the Bible is a resource of ignorance and unending drivel in general or more specifically about the beauty in which our world is to end6 is not only repressed, but also reinterpreted by apologists, who in the light of their error, can now turn a passage requiring one to kill into a passage preaching love. Religious beliefs are in no way as holy as they claim and their unchallengeable status, only challenged by few, is not seemingly worthy of such. Many also seem to miss the point when they claim that religious belief is private and personal, for it is certainly not, as it is as private as any other action. After all, any major action one does is in no doubt based on a belief. For example the belief that it is going to snow assures one to dress warmly. The belief that your God can heal is after all an incentive to pray instead of going to hospital. Going to hospital is the rejection, at least temporarily, of this belief, and it is rejection of beliefs about the nature of one's God, or the doubt of them that seems to save one's life. ...read more.

One should especially be aware that living an untestable hypothesis only to be confirmed on the day one dies is not as harmful as it may seem if one attributes the possibility of a life beyond the grave to a demanding deity. 1 1 Samuel 18:10, 2 kings 6:33 and many other passages actively encourage superstition about the nature of illness. 2 Pascal's wager is the argument in which Blaise Pascal argued that a belief in God was the correct attitude to such claim as it leads to the possibility of eternal life. 3 Swap the proposition of God's existence to any other less preposterous comforting claim about the nature of the universe. 4 Deuteronomy 13:7-11 calls for the eradication of all believers in foreign gods. It may be the Old Testament but it is explicit. On another note, moderates no longer wish to kill in the name of God but still actively encourage the use of the word God as if it were not anything like talking gibberish. 5 Consider the hygienic belief of not washing self; would it a positive demonstration of diversity? Would it enrich humanity? Or would it at the least be a possibly dangerous idea which one should seek to discard? 6See the book of Revelation 7 Indeed the U.S. removing its ban on stem cell research funding is but only the product of secular values. Another comment can be said about moderate religion, it is but only the product of secular values too. ?? ?? ?? ?? ...read more.