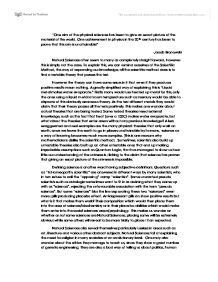 "One aim of the physical sciences has been to give an exact picture of the material of the world. One achievement in physics in the 20th century has been to prove that this aim is unattainable" -Jacob Bronowski Natural Sciences often seem to many as completely straightforward, however this is simply not the case. To explain this, we can remind ourselves of the Scientific Method, the way of expanding our knowledge; all the scientific method does is to find a testable theory that passes the test. However the theory can have some errors in it that even if they produce positive results mean nothing. A greatly simplified way of explaining this is "Liquid metal makes water evaporate." Firstly many would use heated up metal for this, only the ones using a liquid metal at room temperature such as mercury would be able to disprove of this obviously erroneous theory. As the test different metals they would claim that their theory passes all the tests positively. ...read more.

This makes us wonder on whether or not some sciences are Natural Sciences, placing some will be extremely obvious while some others will reveal to be more tricky to place than expected. Natural Sciences also reveal themselves particularly useless in areas such as art, literature and various other abstract subjects. Natural Sciences fail at explaining the need for religion in many societies at an evolutionary level. One may also wonder about the ethics they manage to teach us, since they show a great number of genetic engineering. They are also a bad way of telling us about politics, human history...But most importantly and ironically they are not a good way of giving us the knowledge they wish to give us, as explained earlier on the topic on the scientific method. Meaning and Value of History History is a broad and imprecise subject. We all try to understand History in the best ways that we can, getting closer and closer to the truth. ...read more.

Without History, comparing an events or performance could only be done on a little scale, as no records are taken and ultimately the news would be quite boring, as some subjects such as economic crisis's would become difficult to analyse or handle because the experience we gain from the past would be absent in these cases. We can then place the value of History quite high on an importance scale. One common view on History is that people view it as different/"another country". At first sight, just looking at the past does seem unfamiliar and leave one with a satisfaction of living in his period of time(Some people do prefer the past, but exceptions are bound to exist.). This is to some extent a misconception, because as we analyse the past more and more, there tends to be patterns, linked to another event in the past. Wars are a very good example. So what does all this mean? That however different therefore useless we find History, it actually ends up being relevant and useful in a lot of cases were one might not have expected it to be. ...read more.