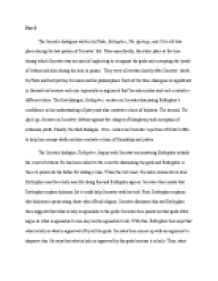 TOK Socrates Summary of Euthyphro, The Apology, and Crito. Applying This To A Real Life Situation

﻿Part I The Socratic dialogues written by Plato; Euthyphro, The Apology, and Crito all take place during the last portion of Socrates? life. More specifically, they take place at the time during which Socrates was accused of neglecting to recognize the gods and corrupting the youth of Athens and also during his time in prison. They were all written shortly after Socrates? death by Plato and best portray Socrates and his philosophies. Each of the three dialogues is significant in themselves because each one represents an argument that Socrates makes and each contests a different claim. The first dialogue, Euthyphro, centers on Socrates dismissing Euthyphro?s confidence in his understanding of piety and also contests a claim of holiness. The second, The Apology, focuses on Socrates? defense against the charges of blasphemy and corruption of Athenian youth. Finally, the third dialogue, Crito, centers on Socrates? rejection of Crito?s offer to help him escape death and also contests a claim of friendship and justice. The Socratic dialogue, Euthyphro, begins with Socrates encountering Euthyphro outside the court of Athens. He has been called to the court for dismissing the gods and Euthyprho is there to prosecute his father for killing a man. ...read more.

He concludes that breaking the laws would make him unjust thus it is best he stay in prison. This argument was a success because Socrates was able to convince Crito to not attempt an escape. Part II At my workplace, the YMCA, it is an expected, however not documented rule that cellular devices are not be used at any time while on the clock. This is an understandable rule however, at certain times during my shift; I tend to not follow this rule for many reasons. I have never been caught with my phone out during a shift however it could very well happen and I would be prepared to justify my actions. The following scenario will explain what could possibly happen, the reaction of administration, and my justification as to why I broke the rules. When I walk onto the pool deck, there are three ?lap swimmers? in the pool as well as the YMCA swim team which consists of kids from the ages of 10 to 18. I understand that with kids at a very young age, it is essential to constantly scan the pool to make sure nothing wrong happens because with young children who are not that strong of swimmers, anything could happen. ...read more.

In my defense, I present many arguments as to why cellular devices should not be banned on the pool deck. Firstly, I argue that when children are in the pool, I only use my phone for a music source. I constantly scan the pool during this time so my vision could make up for a hindrance of sound. Secondly, I argue that while adults who are highly equipped to swim are in the pool, I am only on my phone for two or three minutes at a time and I do scan the pool every so often. If something were to happen, I would also have my sense of hearing to react to an emergency because more often than not when someone gets hurt, another person screams as an initial reaction. This would bring me to my full attention if I were on my phone and allow me to aid the person. Much like the argument that Socrates makes in The Apology, I only got in trouble because of what other people thought was wrong and through my arguments, I tried to justify why what I did was not wrong. ...read more.