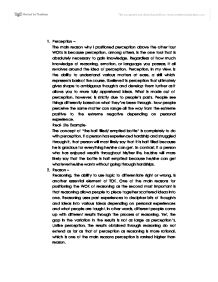 TOK- The Ways of Knowing

1. Perception - The main reason why I positioned perception above the other four WOKs is because perception, among others, is the one tool that is absolutely necessary to gain knowledge. Regardless of how much knowledge of reasoning, emotion, or language you possess, it all revolves around the idea of perception. Perception, in my view, is the ability to understand various matters at ease, a skill which represents basis of the course. I believe it is perception that ultimately gives shape to ambiguous thoughts and develop them further as it allows you to more fully apprehend ideas. What is made out of perception, however, is strictly due to people's pasts. People see things differently based on what they've been through- how people perceive the same matter can range all the way from the extreme positive to the extreme negative depending on personal experience. ...read more.

In other words, different people come up with different results through the process of reasoning. Yet, the gap in the variation in the results is not as large as perception's. Unlike perception, the results obtained through reasoning do not extend as far as that of perception as reasoning is more rational, which is one of the main reasons perception is ranked higher than reason. Real-Life Example- When presented numerous clues that lead to one another, you need reason to piece them together. For example, if given a math problem like x + 3 = 5, you can automatically know that x = 2 if you think logically as the answer is always rational regardless of your past experiences. 3. Emotion - Emotion is a tool used for sharing thoughts. It tends to personalize transmitted information into the way people want it to be shared. ...read more.

However, compared to the other WOKs, the use of language is just a tool to exchange ideas derived from perception, reason, and emotion. Without the other WOKs, no thoughts can be shaped and subsequently shared through language. Yet, without language, thoughts can still be exchanged, just in a more restrained and less lucid matter, although, still doable. The more accessible substitutes for language are the main reasons why I positioned language as the least important WOK among reason, perception, and emotion. Expressions, movements, body language, and several more, for example, can all be reduced substitutes for language. Real- Life Example- When talking to others, there are several ways of expression yourself, the most effective being the use of languages. For example, when you order for something in McDonalds, rather than pointing at the picture vaguely and unclearly, you can simply say the name of the food making it easier for the idea to be transferred. ?? ?? ?? ?? ...read more.