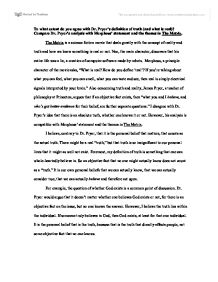 Truth in The Matrix

To what extent do you agree with Dr. Pryor's definition of truth (and what is real)? Compare Dr. Pryor's analysis with Morpheus' statement and the themes in The Matrix. The Matrix is a science fiction movie that deals greatly with the concept of reality and truth and how we know something is real or not. Neo, the main character, discovers that his entire life was a lie, a creation of computer software made by robots. Morpheus, a principle character of the movie asks, "What is real? How do you define 'real'? If you're talking about what you can feel, what you can smell, what you can taste and see, then real is simply electrical signals interpreted by your brain." Also concerning truth and reality, James Pryor, a teacher of philosophy at Princeton, argues that if an objective fact exists, then "what you and I believe, and who's got better evidence for their belief, are further separate questions." ...read more.

For example, the question of whether God exists is a common point of discussion. Dr. Pryor would argue that it doesn't matter whether one believes God exists or not, for there is an objective fact on the issue, but no one knows the answer. However, I believe the truth lies within the individual. If someone truly believes in God, then God exists, at least for that one individual. It is the personal belief that is the truth, because that is the truth that directly affects people, not some objective fact that no one knows. Others might argue that if the truth cannot depend on the individual, then a truth does not exist. However, I believe that "truth" is not a solid entity and that for each issue only one truth exists. ...read more.

The Matrix assumes that there is an objective truth, for Neo and his supporters assume that their world is "real" and that the Matrix is false. Also, the Oracle shows that personal belief is not important, and that an objective truth exists. For instance, she told Neo that he was not the One, so he believed so. This leads to him deciding to go back into the Matrix and save Morpheus, where he displays unintentionally that he is the One. Therefore, The Matrix argues that personal belief does not matter, for Neo was the One all along, despite the fact that he did not believe so at first. It is impossible for people to draw up a consensus on the definition for truth. However, I disagree with Dr. Pryor's idea of truth for I believe that truth depends solely on the individual. But his idea does have merit, and many aspects of it resonate throughout The Matrix. ...read more.