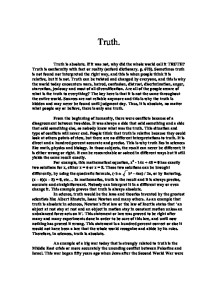 Truth.People think that truth is relative because they could look at others points of view, but there are no different interpretations to truth.

Truth. Truth is absolute. If it was not, why did the whole world call it TRUTH? Truth is conformity with fact or reality (oxford dictionary. p. 678). Sometimes truth is not found nor interpreted the right way, and this is when people think it is relative, but it is not. Truth can be twisted and changed by everyone, and this is why the world today encounters wars, hatred, confusion, distrust, discrimination, anger, starvation, jealousy and most of all diversification. Are all of the people aware of what is the truth to everything? The key here is that it is not the same throughout the entire world. Sources are not reliable anymore and this is why the truth is hidden and may never be found until judgment day. Thus, it is absolute, no matter what people say or believe, there is only one truth. From the beginning of humanity, there were conflicts because of a disagreement between two sides. ...read more.

This statement is a hundred percent correct or else it would not have been a law that the whole world recognize and abide by its rules. Therefore, in sciences, truth is absolute. An example of a big war today that is strongly related to truth is the Middle East crisis or more accurately the unending conflict between Palestine and Israel. This war began fifty years ago when Jews after the Second World War were given a settlement by the British government on this particular land. Palestinians and Israelis could not communicate together and thus a war began destroying lands and killing innocent and poor civilians. For the Arabs, truth is that Jews from Europe and few from other nations came in by force with the help of the British government and took the land by force committing atrocities against Arabic children, men and women. On the other hand, for Europeans and Americans, truth is that Jews were given money by the British government and The U.S.A to buy lands so they can settle in peace after the 'Holocaust'. ...read more.

glory and attraction, a time of science and technology, a time of love and care ness, a time of peace and wars, a time that marked the beginning of a new generation and a style of life. Nevertheless truth was one thing that did not change, may be distorted but its originality will never be changed at all, and this is why truth is absolute and not relative. People interpret things differently including facts; they also change truth and make up their own to prove their point no matter what happens. Truth can best be described as a result of solving a problem in Mathematics, or being a law in Physics or Biology because if it is true, nobody can change it nor contradict it. Today the world is in sorrow and grief because truth is hidden. As the Middle East crisis continues, truth becomes buried more and more until it would never be found. This does not mean that it is relative, because there is only one truth no matter what happens. Therefore, truth is absolute. ...read more.