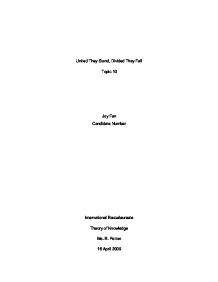 United They Stand, Divided They Fall

United They Stand, Divided They Fall Topic 10 Joy Fan Candidate Number International Baccalaureate Theory of Knowledge Ms. B. Patton 16 April 2009 Humans tend to be inquisitive by nature. We tirelessly seek to know what we do not know and manipulate this gain in insight to aid us in further investigations. It is this strong desire that fuels studies in natural sciences as we attempt to provide explanations for the phenomenons we see. Similarly, the duty of historians does not stop at accounting events, they must also account for those events. Both of these fields require an individual to construct an description of what is perceived, and after applying logic to the situation, either a scientific or a historical explanation is to be formed, and this in turn serves as the model for human understanding of the world. Carriers of good explanations must be conscious of both the reality of the explanation as well as the audience he is conveying it to. In order for an explanation to be of value, it has to be withinin comprehension of the person seeking the answer. People living in the Sahara desert who have never seen ice before will be confounded when trying to grasp the idea of water solidifying. In this scenario, it would be inappropriate to explain to them the concept of ice using scientific terminology, they simply will not be able to understand. ...read more.

The formation of a historical explanation is largely based on the insight of the historian or social scientist. They formulate an analysis of the five elements involved in human actions which include aim, assessment of situation, choice of means, drive and context. A letter from the Vancouver School Board was recently issued to parents informing them of the school board's $7.12 million funding deficit. Their aim prepare parents and students for any impact they might feel as a result of this deficit; their assessment is that a widespread knowledge of the budget may ease tension between parents valiantly pushing their children into already-cramped schools and the schools themselves; the drive is perhaps the desire of the trustee to keep their jobs; and the context is the declining enrollment, a provincial funding formula that does not fund annual cost increases and does not account for inflation. Many occurrences, past and present, may be explained this way, but events do not always turn out as planned, causing an explanation based on the insight of the researcher and the intent of the subject scrutinized may lack validity. One application of historical explanations is to foreshadow events, and to a certain extent, it gives warning while simultaneously achieving the role of reassurance. Most recently, there has been a rising anxiety in the economic situation of the world. ...read more.

All of this conflicted with the manager's reasoning. However, during the investigation my resourceful father also recounted an instance where I, in my hurry to get to school, had left the door wide open upon departure. This provided the manager with a seemingly sound historical explanation that if I was capable of carelessness once, under similar circumstances I would also have that capacity. My emotional refutal of that claim did eventually clear my name, but to this day we have yet to find out who was it, and how they could have broken in and taken everything in our apartment that was worth anything. Some may argue that scientific and historical explanations are distinct and immiscible since they address different areas of knowledge. Science is more concerned with seeking universal laws to explain the phenomenons of the physical world. History, on the other hand, deals with unique and particular scenarios, and even with the deduction of a general law, cannot be further applied and extrapolated to every situation. Both of these explanations rise from the human desire to know one's surrounding environment and being able to not only account but to also account for their past actions. Not only will a good explanation accomplish both of these outcomes, it must also incorporate the two kinds of explanations discussed when perceiving and analyzing the situation. When the two are united they hold true, and divided they fall as an incomplete inference. ...read more.