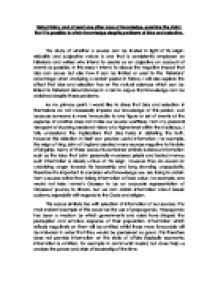 Using history and at least one other area of knowledge, examine the claim that it is possible to attain knowledge despite problems of bias and selection. The study of whether a source can be trusted in light of its origin, reliability and subjective nature is one that is consistently employed by historians and writers who intend to create as an objective an account of events as possible. In this essay I intend to discuss the negative impact that bias can cause but also how it can be limited or used to the historians' advantage when analysing a certain period in history. I will also explore the effect that bias and selection has on the natural sciences which can be linked to historical circumstances in a bid to argue that knowledge can be obtained despite these problems. As my primary point, I would like to stress that bias and selection in themselves do not necessarily impede our knowledge of this period. Just because someone is more favourable to one figure or set of events at the expense of another does not make our source worthless. ...read more.

The most evident example of this would be the use of propaganda. Propaganda has been a medium by which governments and rulers have shaped the perception and emotive response of their population. Information which reflects negatively on them will be omitted whilst those more favourable will be included in order that they would be perceived as good. This therefore does not provide information on the state of affairs (typically economic information is omitted, for example in communist Russia) but does help us analyse the power and style of leadership of the time. However, thus far I have discussed the idea that even biased sources can be scrutinised and examined in order to provide information concerning the motives and reliability of the source. But the situation is complicated when biased sources our used to provide information which may not wholly be accurate. I find this especially the case in my medieval class when there are very few sources provided on an event and those which do are from a subjective background. ...read more.

Archaeology plays a key part in our analysis, by excavating various areas we can determine whether Thucydides was likely to be correct or whether the geophysical results contradict the literature. Historians are generally interested with the entire contexts of events, rather than small individual occurrences. It is very difficult to manipulate history through invention of events without being detected, as other sources and archaeology tend to give away these fallacies. Therefore, with the example of pro-Athenian Thucydides, although he may have glorified Athens' participation in the war, he would not be able to ignore the undeniable truth that Athens lost this war. Most commonly when attempting to obtain knowledge and information, a historian will use a wide range of information in order to reach an objective opinion. By using a wide range of sources, some which disagree with others, historians are improving the accuracy of their findings. Factors such as reliability, background of the writer and his knowledge of the full events are all important in coming to a conclusion and by carefully analysing these sources I think it arguable that historians can come to a legitimate conclusion. Of course this process requires the use of selection, however ...read more.