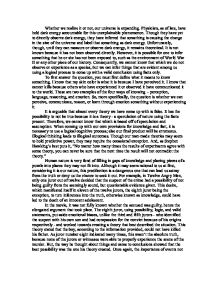 Ways of Knowing - the question is whether we can perceive, communicate, reason, or learn through emotion something without experiencing it.

Whether we realize it or not, our universe is expanding. Physicists, as of late, have held dark energy accountable for this unexplainable phenomenon. Though they have yet to directly observe dark energy, they have inferred that something is causing the change in the size of the universe and label that something as dark energy. Unfortunately, though, until they can measure or observe dark energy, it remains theoretical. It is not known because it has not been observed directly. However, it is possible for one to infer something that he or she has not been exposed to, such as the environment of World War II or any other piece of our history. Consequently, we cannot know that which we do not observe or experience as a species, but we can infer things that are evident among us using a logical process to come up with a valid conclusion using facts only. To first answer the question, you must first define what it means to know something. I know that my skin color is what it is because I have perceived it. ...read more.

This desire, which manifested itself in eleven of the twelve jurors, the eighth juror being the exception, to turn inferences into the truth, otherwise known as knowledge, could have led to the death of an innocent adolescent. In the movie, it was not fully known whether the accused was guilty, hence the elongated argument that took place. The eighth juror, using possibility, logic, and valid statements, put aside emotional biases, unlike the third and fifth jurors - who identified the suspect with his own son and had compassion for the convict because of his origins respectively - and worked towards creating a theory that best described the situation. This theory stated that the boy, according to the information provided, could not have killed his father. As juror number eight indicated many times, this wasn't the absolute truth, because none of the jurors or witnesses were able to properly experience the scene of the murder. But, the way he thought about things and came to conclusions showed that the best possibility was the one his theory created. ...read more.

This theory has been disproved as further research in the field of abiogenesis has been conducted. Though people may have wanted to hope they knew what was the truth, they were using inferences, faulty ones, and invalid thought processes. This lack of perception misled them to misunderstanding of how life originating without having experienced or observed it. Knowledge is the truth. It is what is factual and cannot be proven incorrect. Subsequently, the only method of turning something theoretical into something factual requires one of the ways of knowing to be fulfilled. When we do not experience something, we cannot know whatever it may be generally because of our inability to perceive it, as in the case of dark matter. Therefore, when conducting our daily lives, we should always keep in mind what is fact and what is speculative and never mix the two, or as the great Bertrand Russell puts it, "When you are studying any matter or considering any philosophy, ask yourself only, what are the facts, and what is the truth that the facts bear out? Never let yourself be diverted." ...read more.