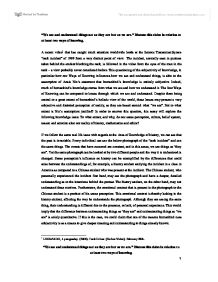 "We see and understand things not as they are but as we are." Discuss this claim in relation to at least two ways of knowing. A recent video1 that has caught much attention worldwide looks at the famous Tiananmen Square "tank incident" of 1989 from a very distinct point of view. The incident, normally seen in pictures taken behind the student blocking the tank, is followed in the video from the eyes of the man in the tank - a view probably never considered before. This questioning of the subjectivity of knowledge, in particular how our Ways of Knowing influences how we see and understand things, is akin to the assumption of Anais Nin's statement that humankind's knowledge is entirely subjective. Indeed, much of humankind's knowledge comes from what we see and how we understand it. The four Ways of Knowing can be compared to lenses through which we see and understand. Despite them being central to a great extent of humankind's holistic view of the world, these lenses may present a very subjective and distorted perception of reality, as they are based around what "we are". But to what extent is Nin's assumption justified? ...read more.

The potential for the past to be distorted was summarised by Winston Churchill when he said "history is written by the victors" (Keyes, 2006)3. Perhaps, then, it would be more apt to approach the real life issue from a different Area of Knowledge, one that is commonly seen as the most rational and objective one. Yet even mathematics, of which the foundation should be reason, can be affected by our beliefs. Cultural differences can always bias the way we perceive things. Taking a step back from the "tank incident", Chinese officials estimate the civilian casualties of the entire Tiananmen Square massacre to be 241 (PBS, 2006)4. As a seventeen year old international student living in Hong Kong, my own cultural biases (that is, living just across the border from the atrocity) force me to hesitate in accepting this figure. Despite there being no statistically proven official figure, I would readily accept the figure cited by what I consider to be a "global" group such as Amnesty International. In this sense, be it actively or passively, I have na�vely chosen my source of knowledge and understanding of things to suit my cultural bias. ...read more.

It has been discussed how the subjective Way of Knowing, sense perception, can affect our knowledge of history; how cultural bias can influence our understanding of mathematics; and how in the Area of Knowledge of ethics, Nin's assumption can be invalid. All of the explanations as to why we are subjective in our understanding of the world around us only seem to pertain to specific Areas of Knowledge, indicating that there is no one reason. There are various reasons (such as deeper understanding and ambiguity) as to why humankind tends to see and understand things as they are, and none of them can be ruled out. In conclusion, Nin's statement can be determined as justified for a few Areas of Knowledge. Why and to what extent humankind sees and understands things subjectively depends entirely, rather ironically, on the individual in question. At times, this subjectivity helps us in our endeavour for knowledge, whilst at times it doesn't. What is certain is that subjectivity is a critical element to knowing, and whether seeing things as "we are" is helpful or not, it will remain a permanent factor in the way we understand things. ...read more.