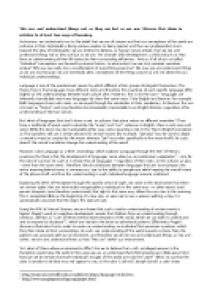 'We see and understand things not as they are but as we are. Discuss this claim in relation to at least two ways of knowing.

﻿?We see and understand things not as they are but as we are.? Discuss this claim in relation to at least two ways of knowing. As humans, we instinctively turn to the belief that we are all unique and that our conceptions of the world are exclusive in their individuality. Being unique equates to being special, and thus our predisposition turns towards the idea of individuality; we are inclined to believe, as human nature entails, that we see and understand things not as they are but as we are. Yet consider child development: a child matures as they form an understanding of their life based on their surrounding influences. And so, if all of our so-called ?individual? conceptions are formed by exterior factors, to what extent can we truly consider ourselves unique? Who are we really, but a manifestation of everything around us? We may see and understand things as we are, but because we are essentially alike, conceptions of the things around us are not altered by our individual understandings. Language is one of the predominant means by which different ethnic groups distinguish themselves. The theory here is that languages have different roots and therefore the meanings of each specific language differ slightly as the understandings between each culture alter. ...read more.

the sight in the same way. When the sun rises in the morning, this is comprehendible as the beginning of a new day, or were we to see a woman walking a dog, it is automatically assumed that the dog is the woman?s pet. Using the AOK of Natural Science, we are shown that such a similar understanding of certain events is logical; Piaget?s work on cognitive development reveals that children form an understanding through schemas, defined as ?a set of linked mental representations of the world, which we use both to understand and to respond to situations?[2], which are stored in the brain as behavioral patterns. Effectively, Piaget?s discovery illustrates that in order to create an understanding, an individual first perceives a pattern, which they then relate to their surroundings. As such, our understanding of the world around us stems from the patterns we associate with our environment, and therefore we do not see and understand things as ?we are?, rather, we see and understand them as how ?they are? within our environment. Yet, what of those whose environments differ? Are we to believe that a rich, privileged woman in the Hamptons would view the world in the same way as an undernourished child growing up in Botswana? ...read more.

As such, when we observe certain sites, our body?s physical responses to what we see are the same, and thus we interpret the sites in the same way. Overall, through explorations of the WOK?s of Language, Perception and Emotion, as supported by evidence in the AOK?s of natural and human sciences and history, we can discern that while each individual may see and understand this as he/she is, rather than how it is, because our understandings are formed from the experiences within our surroundings, these individual understandings do not change between each person. Abraham Lincoln?s quote, ?books serve to show a man that those original thoughts of his aren?t very new after all?[5], reiterates the idea that our understanding of our surroundings is not unique. However, current research shows that our comprehension of the things around us go even further; theory of mind, a hypothesis that targets both Human and Natural Sciences as Areas of Knowledge, explores the human affiliation to folk psychology, which is defined as ?[the human] ability to make predictions about what?s on others? minds?.[6] As such, the research conducted conveys how humans are able to see and understand things not as ?we are? but as ?they are? and further proves how one?s understandings are merely a manifestation of their physical surroundings. ...read more.