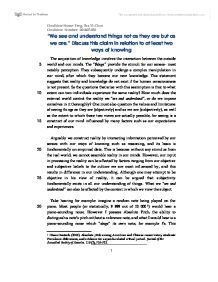 We see and understand things not as they are but as we are. Discuss this claim in relation to at least two ways of knowing

"We see and understand things not as they are but as we are." Discuss this claim in relation to at least two ways of knowing The acquisition of knowledge involves the interaction between the outside world and our minds. The "things" provide the stimuli for our senses- most notably perception. They subsequently undergo a complex manipulation in our mind, after which they become our new knowledge. This statement suggests that reality and knowledge do not exist if the human consciousness is not present. So the questions that arise with this assumption is this: to what extent can two individuals experience the same reality? How much does the external world control the reality we "see and understand", or do we impose ourselves in it thoroughly? One must also question the values and limitations of seeing things as they are (objectively) and as we are (subjectively), as well as the extent to which these two views are actually possible, for seeing is a construct of our mind influenced by many factors such as our expectations and experiences. Arguably we construct reality by interacting information perceived by our senses with our ways of knowing such as reasoning, and its basis is fundamentally on empirical data. ...read more.

viewed the energy source to come from the movement of the atom, the nature of their conclusions are incomparable(E = mc2 and E = mv2) though both legitimate. The outcome of viewing the same "things" in different context (or in other words, subjectively) is that each person's understanding is accessible only through his own interpretation, and is often unparallel with those of others. However, our knowledge goal's context can lead us to fallacious reasoning. Witchery - a belief prevalent in some cultures and documented throughout history is an example. When people of this culture experience hardship, they often adopt superstitious stances without legitimate reasoning to explain their difficulties. For example, BBC once reported on a Congolese family's unfortunate incidents. The family's icebox broke, the mother became sick and had a car accident, the grinder malfunctioned and money went missing.4 The mother reasoned that this was because her children were witches. To people who do not have witchery as a pervasive belief in their cultures, the mother's justification may seem unconvincing because the mother seems to base her argument on the cultural belief that witches exist and that they cause most troubles. However, the mother's understanding of her world is largely affected by her culture's influence on her. ...read more.

The opposite can be said as well, since we need to use subjective means (such as reasoning, which everyone conducts differently) to attempt any objective examination, and this makes thorough objectivity impossible. Since both these point of views exist simultaneously, we should focus on their values and limitations instead. Only when we recognize their qualities and possible sources of errors would we benefit from knowing whether we are seeing and understanding more from our point of view or from that of our subject. WORD COUNT: 1591 1 Diana Deutsch. (2006). Absolute pitch among American and Chinese conservatory students: Prevalence differences, and evidence for a speech-related critical period. Journal of the Acoustical Society of America. 119 (2), 719-722. 2 The Regents of the University of California. (2009).University of California Genetics of Absolute Pitch Study. Available: http://perfectpitch.ucsf.edu/study/. Last accessed 05 November 2009. 3 Deutsch, D., Henthorn T. and Dolson, M. (2004). Absolute Pitch, Speech, and Tone Language: Some Experiments and a Proposed Framework. Music Perception. 21 (3), 339-356. 4 BBC News. (1999). Congo witch-hunt's child victims .Available: http://news.bbc.co.uk/2/hi/africa/575178.stm. Last accessed 05 November 2009. 5 International Baccalaureate Organisation (2001). Diploma Programme History. Geneva: International Baccalaureate Organization. 58. ?? ?? ?? ?? Candidate Name: Teng, Eva Yi-Chun Candidate Number: 001407-038 1 ...read more.