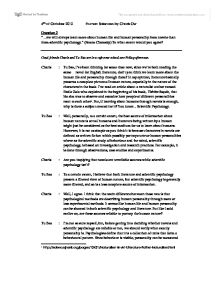 we will always learn more about human life and human personality from novels than from scientific psychology. (Noam Chomsky) To what extent would you agree?

Question 2 "...we will always learn more about human life and human personality from novels than from scientific psychology." (Noam Chomsky) To what extent would you agree? Good friends Charis and Tu Bao are in a cafe near school one Friday afternoon. Charis : Tu Bao, I've been thinking for some time now, since we're both reading the same novel for English literature, don't you think we learn more about the human life and personality through them? In my opinion, literature basically presents a complete picture of human nature, especially in the nature of the characters in the book. I've read an article about a naturalist author named Emile Zola who explained in the beginning of his book, Th�r�se Raquin, that his aim was to observe and examine how people of different personalities react to each other1. But, if learning about humans through novels is enough, why is there a subject created for it? You know... Scientific Psychology. Tu Bao : Well, personally, to a certain extent, the best source of information about human nature is actual humans and literature being written by a human might just be considered as the best medium for us to learn about humans. ...read more.

This helps me to gain knowledge of his behaviour and feelings, leading me to his personality which we established earlier on that they are all closely related to one another. Tu Bao : But in that case, subjectivity did not restrain your knowledge of the main character's personality even as your emotional stance altered and grew due to sympathetic reason towards him, right? Charis : Right. Tu Bao : But let's think about this. Even if the subjectivity of novels does not impair the precision of how you learn about human personality and life from, but from a scientific view, the knowledge that you gained on the characters' personalities can be flawed as it may not be applicable to the human race as a whole. Charis : Because it's written by the author from his perception. Tu Bao : Exactly. Charis : This is tricky. But see, referring back to Regeneration, the main character, Seigfried Sassoon does not automatically make us gain knowledge about the soldiers that are experiencing post-war effects in Craiglockgart as a whole. However, we are still able to gain the notion of culture through it. ...read more.

But, have you ever thought that this can only be accessed to is one is literate? Novels depend solely on written language to transfer knowledge, lowering its ability as a medium to gain more knowledge. Tu Bao : So, because of that, one has to rely on his or her experience to gain knowledge about the human personality and life. Charis : Yeah. Tu Bao : You know, if Chomsky did not use the word "scientific" in his quote, this discussion would have been entirely different. This is because psychology would then have a wider scale and be able to cover much more personality aspects and still retain some of its accuracy. Charis : But, oh well, after having this conversation, we still cannot decide which is more reliable than the other. Tu Bao : That's because both novels and scientific psychology are possible mediums for us to gain knowledge of human life and human personality. So, we cannot be certain as there are no definitive answers which are the right sources for us to do that. Charis : Alright. Let's leave this before I become even more confused. Tu Bao : *laughs* Alright. (1477 words) 1 http://science.jrank.org/pages/10431/Naturalism-in-Art-Literature-Father-Naturalism.html ?? ?? ?? ?? 6th of October 2010 Human Sciences by Charis Ow ...read more.