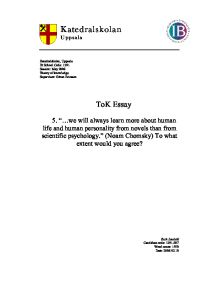 &quot;...we will always learn more about human life and human personality from novels than from scientific psychology.&quot; (Noam Chomsky) To what extent would you agree?

Katedralskolan Uppsala Katedralskolan, Uppsala IB School Code: 1291 Session: May 2008 Theory of knowledge Supervisor: G�ran Ericsson ToK Essay 5. "...we will always learn more about human life and human personality from novels than from scientific psychology." (Noam Chomsky) To what extent would you agree? Zack Lindahl Candidate code: 1291-037 Word count: 1550 Date: 2008 02 10 Zack Lindahl, 1291-037 The novel genre is per definition written fiction. The scientific study of behaviour and the mind, psychology, is based on research methods such as observations, case studies and experiments. At a glance, the main difference between these is that psychological methods are describing human personality through more or less empirical methods. In short, psychology is based on experience. However, despite the label of fiction, novels are often not branded as purely conjecture, but often attempts to realistically display human personality, based on the author's own experience. The naturalist author Emile Zola explained in his foreword of Th�r�se Raquin that his aim was to observe how different personalities reacted to each other. It seems that personality can be showed in both psychology and literature. However, can human personality be reliably portrayed in these media? According to the quote, the term knowledge will refer to the knowledge about human personality only. ...read more.

For that reason, results are interpreted to suit the current paradigm. Personality can therefore not be portrayed fully. For example, the Behaviourist school does not measure mental processes, as their paradigm entails that only observable behaviour should be monitored. There are, however, other schools of psychology that tries to explain what personality is through models of mental processes. However, these do not adhere fully to the empirical method relevant to scientific psychology; they may be deemed as pseudo-scientific, therefore not applicable to the argument. The core error of observation, the limited perception, does not impair novels portrayal of human personality, while scientific psychology is hampered by the strict research methods and the influence of current paradigm which makes it unable to explain knowledge of personality as broadly as novels. Even though the subjectivity of novels does not impair the clarity of how you learn about personality from it, it suffers from the problem of induction. The knowledge gained about the characters in a novel can be considered Zack Lindahl, 1291-037 flawed as the knowledge gained about the characters may not be applicable to the human race as a whole. Knowledge about the main character Halim in Ett �ga R�tt does not automatically make you gain knowledge of Arabian immigrants in Stockholm as a whole. ...read more.

However, most humans are amateur psychologist, with an understanding of human behaviour. Through experience I have learned to predict the behaviour of others, detect personality types easily and grasp the workings of human society. While being illiterate, this knowledge can be transferred without written language, and therefore in some cultures be superior to novels, due to simple fact that no one would be able to learn from them, as they can not read. Amateur psychology is not scientific though, and therefore is excluded as psychology by Chomsky's definition. Fictional literature is a broad and most extensive medium and the problems of subjectivity, induction and language is in context with the quote inconsequential, or even beneficial. However, would Chomsky not have used the dire word "scientific" the discussion could have been entirely different. Psychology would then have a broader spectrum, and be able to cover much more personality aspects, and still retain some of its precision. That is not the case, and therefore I agree mostly with Chomsky, in that you can learn far more of almost any aspect of personality, with more nuances and difference with novels compared to scientific psychology. Nevertheless I must digress that the weakness that the title has which ignores important innate abilities that are unconnected with written language is my main restriction for not being more favourable towards psychology. ?? ?? ?? ?? 2 ...read more.