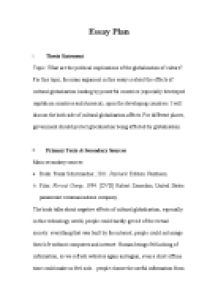 What are the political implications of the globalisation of culture? (Essay Plan)

﻿Essay Plan 1. Thesis Statement Topic: What are the political implications of the globalisation of culture? For this topic, the main argument in this essay is about the effects of cultural globalisation leading by powerful countries (especially developed capitalism countries and America), upon the developing countries. I will discuss the both side of cultural globalisation affects. For different places, government should protect glocalisation being affected by globalisation. 1. Primary Texts & Secondary Sources Main secondary sources: 1. Book: Frank Schirrmacher, 2011. Payback. Edition. Pantheon. 2. Film: Forrest Gump, 1994. [DVD] Robert Zemeckis, United States: paramount communications company. ...read more.

It has been noted that Gump follows a very conservative lifestyle. I think the way that he insists his lifestyle leads his success of the whole life. 1. Main Methodological Globalisation involves the period of modernism & post-modernism. Modernity had been a European invention. Post-modernity had mainly been about the rise of American society in world politics. Following the Second World War, America experienced the temporary success of a cultural and political consensus- Supposedly based on liberalism, pluralism and classlessness[1]. When the Berlin wall collapsed Americans believed that every country in the world soon adopts the American way of life. Cultural globalisation brings modern society both positive and negative political implications. Globalisation links local events to global processes. ...read more.