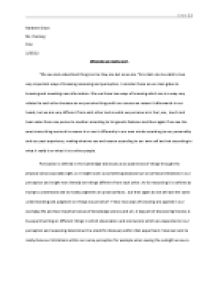 What do we really see?

﻿Grace | ________________ Nardeen Grace Ms. Fleming TOK 1/25/12 What do we really see? ?We see and understand things not as they are but as we are ?this claim can be valid to two very important ways of knowing reasoning and perception. I consider these as our main gates to knowing and revealing new information. We use these two ways of knowing which are in a way very related to each other because as we perceive things with our senses we reason it afterwards in our heads, but we are very different from each other and so what we perceive as in feel ,see , touch and hear varies from one person to another according to his genetic features and then again if we see the exact same thing we tend to reason it or see it differently in our own minds according to our personality and our past experience, making what we see and reason according to our own self and not according to what it really is or what it is to other people. Perception is defined in the Cambridge dictionary as an awareness of things through the physical senses specially sight, so it might seem as something absolute but we all have limitations in our perception and might even literally see things different from each other. ...read more.

The concluding part of the experiment is dependent on the reasoning of the person by evaluating the observation and what it really means scientifically. In science we tend to use inductive reasoning meaning that we base a specific idea on the general. For example when an experiment is made on a plant and the result shows that it undergoes photosynthesis then we reason that all plants undergo photosynthesis. People tend to differ in their reasoning, one of the reasons is that we may see different things due to our perception limitations and the other is that although we might see the exact same things, our understanding and reasoning of what we see is based on our own experiences and knowledge. For example going to the science of astronomy if two people are watching the stars and one is shiner than the other, one might reason that the star is simply shinier than the other and the other might reason that it is because it is closer than the other. Another example is two people watching the sun set one might reason that the earth goes around the sun and the other might reason the sun goes around the earth even though they both saw the exact same thing the reasoning or the conclusion behind it is different. ...read more.

But then again the person who drew or invented the piece of art had a certain purpose behind it that he wanted to deliver to his audience so does that make art in a way objective? Since no matter what people think of the art piece its original intention and message will stay the same regardless of how people perceive or reason it. This makes art like science although it is a certain fact everyone sees it differently not because it is different but because we are different from each other in terms of our perception and reasoning. To conclude I support the quote fully for it is true that no matter how objective something can be it changes to be subjective not because it is so but because people are different that in each others in many different ways and so we see things as we are and as our past experience and knowledge tend to be rather than what it could really be. This means that there is a whole world of objectivity that we can?t reach due to our limitation but as human collaborate together we search a certain agreement and conclusion on some objective facts in the field of Science and Art. ...read more.