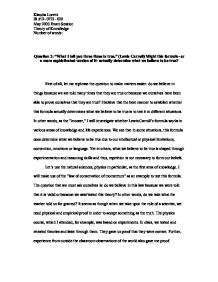 &quot;What I tell you three times is true&quot; (Lewis Carroll) Might this formula- or a more sophisticated version of it- actually determine what we believe to be true?

Question 2: "What I tell you three times is true." (Lewis Carroll) Might this formula- or a more sophisticated version of it- actually determine what we believe to be true? First of all, let me rephrase the question to make matters easier: do we believe in things because we are told many times that they are true or because we ourselves have been able to prove ourselves that they are true? I believe that the best manner to establish whether this formula actually determines what we believe to be true is to test it in different situations. In other words, as the "knower," I will investigate whether Lewis Carroll's formula works in various areas of knowledge and life experiences. We see that in some situations, this formula does determine what we believe to be true due to our intellectual or physical limitations, convention, emotions or language. Yet in others, what we believe to be true is shaped through experimentation and reasoning skills and thus, repetition is not necessary to form our beliefs. Let's use the natural sciences, physics in particular, as the first area of knowledge. I will make use of the "law of conservation of momentum" as an example to test this formula. The question that we must ask ourselves is: do we believe in this law because we were told that it is valid or because we saw/tested this theory? ...read more.

We see that these students use reason as a way of knowing, unlike the first group. In trying to assess whether Carroll's formula is valid in all situations, it is important to ask ourselves the question, "what causes some students to take information for granted and others to reason and not just absorb repetitive information?" I believe that five basic factors play a role here: culture and its conventions, emotions, personality, intelligence, and background knowledge. Firstly, the culture that we live in and the conventions and social environment in it is very significant. If we are repeatedly told that, for example, the Soviets were evil, we will be more likely to believe the above historical interpretation. Also, in every culture, the student-teacher relations are very different. In the United States, it seems as though students are encouraged to ask questions and maybe even to be skeptical. Teachers believe that knowledge should be acquired through active class participation and critical thinking. Yet in many Polish schools, students are taught to take the information for granted, memorize it, and to never question the teacher. Secondly, students often use emotion as a way of knowing. For example, the students may be Russian and thus, nationalism, which is an emotional feeling, may cause him to react in such a manner. ...read more.

However, they take this idea for granted due to the fact that they have been exposed to it since birth, thus it is a tradition, a repetitive concept in their lives. Convention persuades them to believe that the idea that God created the world is the absolute truth. This concept applies to all religions due to the fact that unlike they all rely on belief itself and not evidence. While in science, a theory has to be proven scientifically, in religion, faith and belief itself is enough to convince someone that for example, God exists. I was able to test Lewis Carrol's formula in several areas of knowledge, paying particular attention to ways of knowing such as reason, emotion, and language. On the basis of various renown, personal, and cross-cultural examples, I was able to find that this "formula" only applies in certain areas and situations. Scientists use the scientific method to determine what they believe to be true, unless physical or intellectual factors limit them. In history we see that the beliefs of some students are formed through reason, while others are affected by the idea"what I tell you three times is true." In everyday life situations, we see that this formula does create our beliefs, such as in our religions and reaction to slogans. It is important to take int Klaudia Loretti, D-0721- 020, page 2 Klaudia Loretti IB # D- 0721- 020 May 2003 Exam Session Theory of Knowledge Number of words: ...read more.