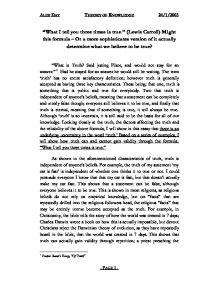 &quot;What I tell you three times is true.&quot; (Lewis Carroll) Might this formula - Or a more sophisticates version of it actually determine what we believe to be true?

"What I tell you three times is true." (Lewis Carroll) Might this formula - Or a more sophisticates version of it actually determine what we believe to be true? "What is Truth? Said jesting Pilate, and would not stay for an answer." 1 Had he stayed for an answer he would still be waiting. The term 'truth' has no entire satisfactory definition; however truth is generally accepted as having three key characteristics. These being; that one, truth is something that is public and true for everybody. Two that truth is independent of anyone's beliefs, meaning that a statement can be completely and utterly false though; everyone still believes it to be true, and finally that truth is eternal, meaning that if something is true, it will always be true. Although 'truth' is so uncertain, it is still said to be the basis for all of our knowledge. Looking closely at the truth, the factors affecting the truth and the reliability of the above formula, I will show in this essay that there is an underlying uncertainty in the word 'truth.' Based on a series of examples, I will show how truth can and cannot gain validity through the formula; "What I tell you three times is true." As shown in the aforementioned characteristics of truth, truth is independent of anyone's beliefs. For example, the truth of my statement 'my car is fast' is independent of whether one thinks it to true or not. ...read more.

Israel is largely portrayed as the provoker, and actions are regularly taken out of context. CNN and the BBC have been noted for their bias toward the Palestinian side. Numerous articles have been written detailing these specific violations of objectively. When repeatedly reading such article, the public have no reason not to believe the so called facts presented by the media to be true. Through this example, one sees how the authorative knowledge presented by the media, can have great affect on the truth, and cause people to believe something that is entirely untrue. Human beings learnt through their senses. 'Our sense perception enables us to appreciate the world.'2 What is out there in the world, we see, smell, touch, taste, and hear with our senses, and the perception of what we see, smell, touch, taste, and hear is reasonably objective. When referring to the formula "What I tell you three times is true," one can see how empirical knowledge relates. If someone tells us something three times, but all five of our senses are against what we are being told, we have a problem. In this case we see how the senses that allow appreciate the world, are being challenged by a formula. This also introduces the question of whether we should trust our senses, as we know that they can deceive us. We often learn through our past experiences. ...read more.