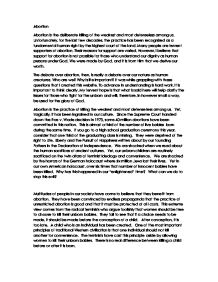 What is an abortion?

Abortion Abortion is the deliberate killing of the weakest and most defenseless among us. Unfortunately, for the last few decades, the practice has been recognized as a fundamental human right by the highest court of the land. Many people are fervent supporters of abortion. Their reasons for support are varied. However, I believe that support for abortion is not possible for those who understand our dignity as human persons under God. We were made by God, and it is from Him that we derive our worth. The debate over abortion, then, is really a debate over our nature as human creatures. Who are we? Why is life important? It was while grappling with these questions that I created this website. To advance in understanding is hard work. It is important to think clearly. My fervent hope is that what is said here will help clarify the issues for those who fight for the unborn and will, therefore, in however small a way, be used for the glory of God. Abortion is the practice of killing the weakest and most defenseless among us. Yet, tragically, it has been ingrained in our culture. Since the Supreme Court handed down the Roe v. Wade decision in 1973, some 40 million abortions have been committed in this nation. This is almost a third of the number of live babies born during the same time. If you go to a high school graduation ceremony this year, consider that one third of the graduating class is missing. They were deprived of the right to Life, Liberty and the Pursuit of Happiness written about by our founding Fathers in the Declaration of Independence. We are shocked when we read about the human sacrifices of ancient cultures. Yet, our unborn children are routinely sacrificed on the twin altars of feminist ideology and convenience. We are shocked by the horrors of the German holocaust where six million Jews lost their lives. ...read more.

By repeating this lie over and over again, they are able to slander our side by accusing us of not caring about women. Of course, we care about the lives of women. We also care about the lives of their babies. If you listen to the rhetoric of the pro-abortion activists, you would be convinced that most abortions are committed to save the life of the Mother. This is not the case. Almost all abortions are committed for the purposes of convenience and economics. To dramatize the "need" for safe and legal abortions, activists frequently present before us an image of desperate women getting dangerous back-alley abortions where a wire is used. They have even turned a clothes hanger into a symbol to present this image. To fall for this, one must have a low opinion about the intelligence of women. Surely, few if any women would allow themselves to be mutilated in this manner. Those that would have other problems that legalized abortion would not cure. How many millions of babies are the pro-abortion activists willing to sacrifice just to save a few mentally deranged women? Another lie used against us is that we really do not care about the children. The pro-abortion activists portray us as wanting to put the unwanted children saved from abortion into impoverished orphanages. Although the children would find this better than their fate at the hands of the pro-abortion activists, it is simply not true. Many of the children saved from abortion would be wanted by their extended families. Others would find homes with adoptive families. If we were successful in preventing any more abortions, there would be no need to cram unwanted children into orphanages. As good moral people, what are we to do about this evil of abortion? Is there really anything that we can do to end it? Yes there is. We should vote only for pro-life candidates. ...read more.

The pro-abortion side has captured the media. Therefore, we need to bypass it with our own message and go directly to the American people. The churches and synagogues need to be fully mobilized in the fight against this evil. They have been silenced every time the enemy yells the magic words "separation of church and state". Why should we abide by the rules of our cultural enemies? The leaders of churches and synagogues should not be bullied. They should strongly encourage all their members to register to vote and to vote only for pro-life candidates. The issue of abortion is not just a political one. It is very much a religious one. It drives straight to the heart of our beliefs. My friends, we have never even tried these winning strategies. This is why I am so optimistic about our eventual success. As a final analogy, we can look at events during the Civil War. At first, things went badly for the North. The Confederates in the South, although outnumbered, were winning most of the battles. Then, President Lincoln appointed Grant as Lieutenant General of all Union Armies. At the time, the common practice of warfare was to rest after fighting a battle. Both sides would withdraw, not only to bury their dead, but also to rest and obtain supplies. However, Grant changed this practice. He was like a bulldog. He attacked, attacked, and attacked. This strategy was pursued for almost a year, and it buckled the knees of the Confederate army. To end abortion, we need to do the same thing. We need to attack repeatedly and without rest, not with lies and distortion, but with the truth given to us by God. We are the people of Life, and Life must prevail over death. If the pro-abortion forces are strong, it is because of our weakness. It is now time to rouse ourselves. By our faithfulness and stubborn adherence to the truth, we will prevail. We must prevail. It is by God's help that we as a people will overcome this plague of abortion that has infected our land. ...read more.