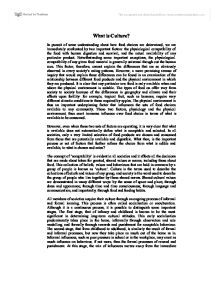 What is Culture? In pursuit of some understanding about how food choices are determined, we are immediately confronted by two important factors: the physiological compatibility of the food with human digestion and survival; and the actual availability of any particular product. Notwithstanding some important exceptions, the physiological compatibility of any given food material is generally universal though out the human race. This factor, therefore, cannot explain the differences that are so obviously observed in every society's eating patterns. However, a more promising avenue of inquiry that would explain these differences can be found in an examination of the relationship between different food products and the physical environment in which they are produced. It is clear that any particular raw food is only available when and where the physical environment is suitable. The types of food on offer vary from society to society because of the differences in geography and climate and their effects upon fertility: for example, tropical fruit, such as bananas, require very different climatic conditions to those required by apples. The physical environment is thus an important underpinning factor that influences the sets of food choices available to any community. These two factors, physiology and the physical environment, thus exert immense influence over food choice in terms of what is available to be consumed. ...read more.

However, there are additional influences beyond one's immediate sphere of contacts that can also further influence the belief and value system considered to be acceptable. Sometimes these influences emanate from state institutions such as governments that change behaviour for acceptance and social status: for example, to be more ecologically conscious; or educational programmes such as healthy eating and anti smoking campaigns. They may result from other influences such as new fashions. One factor that has made this resocialisation process more significant in industrialised societies in the early twenty first century, is the impact of a global electronic mass media. The nature of culture It is important to recognise that culture is a concept that is paradoxical: it is both inherently stable as well as being inherently dynamic. Thus, all cultures are resistant to change. The primacy of the early socialisation and inherited traditions within the family circle ensure that these values are the most resistant to change: those that are everyday family rituals, recipes, etc. However, within every society there is a dynamic for change that recognises the conflict between old and new values. This dynamic is more powerful in modern societies, particularly when the influence of the media can rapidly circulate knowledge of new values though out society. Much of the information that is circulated in these ways deliberately contains a message for change: for example, political speeches. ...read more.

In this way, the choices made are imbued with a raft of other meanings that are read and understood by the group as social markers. This clearly has implications for the individual who can use the symbolism of food choice to demonstrate their personal social status and position in the group. To summarise then, it is clear that the overall provision of food in all societies is determined by the human digestion system and the physical environment that determines which particular food products can be grown. However, it is significant that within this huge range of availability, every society makes very specific choices abut what is acceptable for consumption, as well as about the particular ways that the chosen food is prepared, cooked and eaten. The decisions that are made about acceptable food are determined by the group, or at least by a significant majority. The process by which the shared values are passed on to each new generation has generally been achieved though formal and informal process of socialisation that take place most importantly in early childhood. For this reason those values tend to be most resistant to change. However, in modern societies, the new dimension of the mass media has changed the balance of the mechanisms for socialisation, so that new influences can now be successfully circulated across cultures through appeals to the consumers' sense of social status within this mediated cultural framework. ...read more.