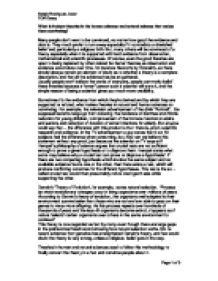 What is it about theories in the human sciences and natural sciences that makes them convincing?

What is it about theories in the human sciences and natural sciences that makes them convincing? Many people don't want to be convinced, no matter how good the evidence and data is. They much prefer to turn away especially if it contradicts a cherished belief and particularly a religious faith. But, many others will be convinced of a theory especially when it is supported with hard evidence from observation, mathematical and scientific processes. Of course, even the good theories are open to being replaced by other related but better theories as observation and evidence accumulate over time, for instance Newton's by Einstein's, so there should always remain an element of doubt as to whether a theory is a complete description, and that all the evidence has been gathered. Usually people won't believe the words of everyone, people commonly belief these theories because a "smart" person such a scientist will state it, and the simple reason of being a scientist gives you much more credibility. Sometimes it's the evidence from which they're derived and by which they are supported or refuted, what makes theories in natural and human sciences so convincing. ...read more.

More recent evidence from genetics has strengthened Darwin's theory, and few would doubt the theory is very strong, unless a religious belief gets in the way. Theories in human and natural sciences used to follow this methodology to finally convert the theory in a fact and convince people about it. But actually, people exploit the media to make consumers buy a specific product such as a shower gel for example, when they use scientific language and statements such as "Scientifically proven" "9 out of 10 people think this product is the best" that are not proven to persuade consumers. Nothing, no matter how scientifically proven, is ever a hundred per cent true. Even the laws of science may be disproved if new facts or evidence contradicts them. Einstein's theory may be disproved at any moment by anyone. This is what gives entrance to doubt which is key to prove theories. The natural science includes subjects such as physics, chemistry and biology which they focus into a different aspect of nature. But I believe that, proving a scientific hypothesis does not require doubt. It requires methodology. ...read more.

If you do not want to believe in God then why would you believe in the creation of science? Anything that says "No God did it" would be appealing to them and would be more convincing. Can you test evolution? Can you test creation? Neither can be done so whichever one you believe is the one you will defend. So, what makes human and natural science theories so convincing? Commonly are, proof, research and evidence the keys to convince people. A theory is only as good as the evidence that supports it. If you want to know how convincing a particular aspect is then have a look in to the research history and see how it is backed up. But it can also depend on the believes of each person as mentioned before, if someone really beliefs on a theory, even if there is no proof, testing or science method supporting the theory they will still strongly belief the theory. For example, if a Spanish person really loves his country and someone states on TV that Francisco Franco was a good dictator and improved the Spanish economy discarding the thousands of people he killed, a lot of Spanish people will agree even without knowing the Franco`s history. ...read more.