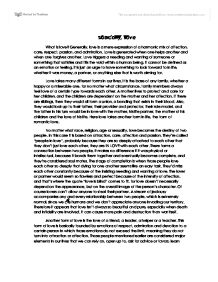 What is love? Generally, love is a mere expression of a harmonic mix of affection, care, respect, passion, and admiration. Love is generated when one helps another and when one forgives another.

Basically, Love What is love? Generally, love is a mere expression of a harmonic mix of affection, care, respect, passion, and admiration. Love is generated when one helps another and when one forgives another. Love triggers a needing and wanting of someone or something that satisfies and fills the void within a human being. It cannot be defined as an emotion or feeling, it is just an urge to have something to look forward to in life, whether it was money, a partner, or anything else that is worth aiming for. Love takes many different forms in our lives. It is the base of any family, whether a happy or a miserable one, for no matter what circumstance, family members always feel love of a certain type towards each other. A mother lives to protect and care for her children, and the children are dependent on the mother and her affection. If there are siblings, then they would all form a union, a bonding that exists in their blood. Also, they would look up to their father, their provider and protector, their role model, and the father in his turn would be in love with the mother, his life partner, the mother of his children and the love of his life. ...read more.

Of course lovers can't allow anyone to steal their partner. A stream of jealousy accompanies any and every relationship between two people, which is extremely normal, since we are humans and we don't appreciate anyone invading our territory. Therefore it appears that love isn't always so beautiful and pure, especially when death and infidelity are involved. It can cause more pain and destruction than war itself. Another form of love is the love of a friend, a leader, a helper or a teacher. This form of love is basically founded by emotions of respect, admiration and devotion to a certain person in which those emotions do not exceed the limit, meaning they do not turn into attraction or affection. Those people mentioned earlier are considered major elements in our lives that we can rely on, open up to, ask for advice or favors, learn from, take up as a role model and return all that to them. The level of trust and loyalty is extremely high when it comes to friends or companions. Teachers and leaders are our guides in life; we follow their lead and admire them for who they are. ...read more.

People treat their pets as if they were their own children, they feed them, bathe them, and sometimes walk them, just to close that gap of needing and wanting something or someone who or that needs and want you back. Those animals become a baby or even a best friend, and they substitute any other source of love that isn't available to a person. All in all, love is basically a force that joins. It might be an obsession or an illusion, either way, it is projected from an entity that loves, and directed to anything that can be loved, but it isn't always mutual. It's the foundation of anything and everything, and when it's lost, it's the destroyer of everything. We can't control it, we can't control who or what we love, and we can't explain why exactly we love something or someone, at least not precisely, and that is the magic of love. You don't know where it comes from, if it benefits you, you want more. If it fails you, you don't want it at all. Maybe sometimes we can't live with it or endure it, but we definitely cannot live without it, for it is the essence of our lives. Done by: Lugein al Fayez 11 IB 21 ...read more.