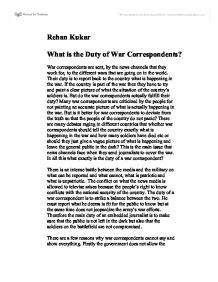 The duty of a war correspondent is to strike a balance between the two. He must report what he deems is fit for the public to know but at the same time does not jeopardize the army's war efforts. Therefore the main duty of an embedded journalist is to make sure that the public is not left in the dark but also that the soldiers on the battlefield are not compromised. There are a few reasons why war correspondents cannot say and show everything. Firstly the government does not allow the media to disclose everything about the army's tactics because maybe the enemy might intercept the channel's coverage and learn about the position of the troops. Also the public might not want to know about how the soldiers have died. ...read more.

He must also acquaint himself with military terminology so that he can convey what is actually happening. These are the various other duties of war correspondents. A war correspondent has a very dangerous job. The job carries a high degree of risk. He is in danger of being shot at, of being bombed, of being taken hostage... the list continues. He must be able to report regularly but also carefully. He has to stay out of trouble and safe. Though the risks are large there are many war correspondents out in the field doing their duty tirelessly. Even though they are criticized at every turn along the way, they take it in their stride and do their duty perfectly. The war correspondents do everything in their power to make sure that the public is in the know even if it means risking their lives and this is a war correspondent's true duty. ...read more.