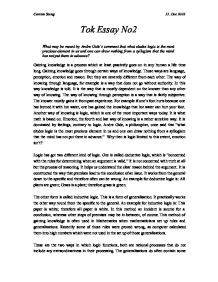 What may be meant by AndreGide's comment that what eludes logic is the most precious element in us and one can draw nothing from a syllogism that the mind has not put there in advance?

Tok Essay No2 What may be meant by Andre Gide's comment that what eludes logic is the most precious element in us and one can draw nothing from a syllogism that the mind has not put there in advance? Gaining knowledge is a process which at least passively goes on in any human a life time long. Gaining knowledge goes through certain ways of knowledge. Those ways are language, perception, emotion and reason. But they are severely different from each other. The way of knowing through language, for example is a way that does not go without authority. In this way knowledge is told. It is the way that is mostly dependent on the knower than any other way of knowing. The way of knowing through perception is a way that is fairly subjective. The knower mostly gains it from past experience. For example if one's foot hurts because one has burned it with hot water, one has gained the knowledge that hot water can hurt your foot. ...read more.

It works from the general down to the specific and therefore often can be wrong. An example for deductive logic is: All plants are green; Grass is a plant; therefore grass is green. The other form is called inductive logic. This is a form of generalisation. It practically works the other way round from the specific to the general. An example for inductive logic is: This paper is white; therefore all paper is white. In this method an incident is source for a conclusion, whereas other steps of premises may be in between, of course. This method of gaining knowledge is often used in Mathematics when mathematicians set up rules and generalisations. Recently some of those rules were proved wrong, as computer calculated them into high numbers which were not used in the set up of those generalisations. These are the two ways in which logic functions, both are rational processes that do not include any extraordinariness in their processing. ...read more.

Emotions as faith, respect, dignity and liking are values that do determine whether one likes one or not. It is the basis for relationship of any kind. It actually is what creates "relation-webs" in life. This is because the acquisition of knowledge through emotion is very personal and the knowledge of a human always is a factor for his personality. In other words everything a human gains by emotion is a feeling, knowledge of which affects his character towards something. If for example a young boy hits his finger with a hammer so that it broke and caused terrible pain. The this boy will have a certain attitude towards hammers and tools, although if he might have forgotten about the event in particular, it still remain as subconscious knowledge and the feeling or smell or fear related to the action. After all emotion is what does form our personalities and create our characters by letting us know what is bad or good. ...read more.