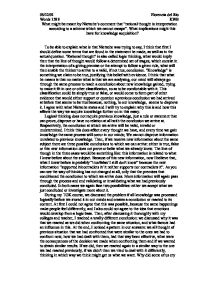 What might be meant by Nietzche's comment that &quot;rational thought is interpretation according to a scheme which we cannot escape&quot;. What implications might this have for knowledge acquisition?

What might be meant by Nietzche's comment that "rational thought is interpretation according to a scheme which we cannot escape". What implications might this have for knowledge acquisition? To be able to explain what is that Nietzche was trying to say, I think that first I should define some terms that are found in the statement he made, as well as in the actual question. "Rational thought" is also called logic thinking, what would imply then that the line of thought would follow a determined set of stages, which consist in the interpretation of a giving premise or the attempt to follow a given rule, what will then enable the thinker to arrive to a valid, if not true, conclusion. "Knowledge" is something we claim to be true, justifying this belief with evidence. I think that what he means is that no matter what is that we are analysing, our mind will always go through the same process to reach a conclusion about new knowledge gained, trying to make it fit in one or other classification, so as to be comfortable with it. This classification could be simply true or false, or would come to form part of other evidence that would either support or question a previous conclusion we had arrived at before that seems to be true because, nothing, to our knowledge, seems to disprove it. ...read more.

Why did some of us cry when we heard about the death of some one we knew and some of us don't? Well, some of the ones who cried thought that crying was a way of dealing with the problem quickly, releasing the tension caused by it and others just did because they had understood sadly that a change in the world they knew had been produced and they did not like what that implied. Some of the ones who did not cry thought that it was a useless thing to do so, because it does not allow you to understand the situation in its full magnitude and others because they did not like to lose control of themselves. Anyway, it all came from a logic base, and that will condition even art to be based in logic. I believe this to be true too. Even artists such as Picasso that intended to do everything different followed a rule that was to do only things that were original. This concept of originality immediately dismissed what he already knew about art, so he kept himself out of those boundaries that had been previously stated by other artists, but this option conditioned his following work and created a scheme to follow. ...read more.

Their scheme of thinking has got no other knowledge that would induce them to analyse what they are reading, and just interpret everything as been meant as it was said. In this I agree with Roger Bacon when he says: "There are two modes of acquiring knowledge, namely by reasoning and experience. Reasoning draws a conclusion and makes us grant the conclusion, but does not make the conclusion certain, nor does it remove doubt so that the mind may rest on the intuition of truth, unless the mind discovers it by the path of experience." 1 To conclude, I just want to say that all knowledge that we absorb cannot contradict out scheme of thinking if we are not willing to change it and, in some cases, this cannot be done. People base the way they act in some beliefs and, if this ones are proved wrong to them, they will probably will not accept this so easily because it would change not only the way in which the will react in the future, but will also give different meaning to what they did in the past. The mind will only absorb that what it can understand and accept that does not create conflict in its convictions. 1 http://home.swipnet.se/ulf_p/tok/tok.htm 06/12/01 Florencia del Rio Words 1588 KWB 1 ...read more.