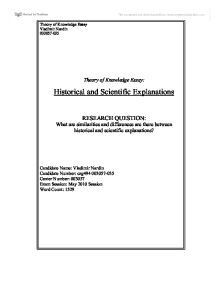 What similarities and differences are there between historical and scientific explanations?

For example if a Historian thinks that the ends justify the means then he might see Stalin's five year plans as being good while another Historian who thinks that the ends don't justify the means will perceive the 5 year plans as being wrong. Another prime example is the on-going debate concerning the causes of World War One. Multiple viewpoints or perceptions on the subject have appeared over time such the orthodox, revisionist and post-revisionist viewpoints. The way Scientists use perception as a way of knowing is very different from Historians because in a scientific experiment all the results is based on the facts and what they see; none of their personal evaluations or thoughts play a big part in explaining things like reactions of chemicals. This shows that Historians use perception as a way of knowing while Scientists do not. However, both historical and scientific explanations both try to achieve a neutral stance or un-biased approach on any topic they investigated. Hence, science and history both operate under the assumption that objectivity is a necessary component of any investigation, and that the results and data should be public. Both have similar rules and procedures for the constitution of evidence and the relative importance of different kinds of evidence. ...read more.

Nonetheless, in history as greater information becomes available to the general public regarding an event, wider viewpoints will form (i.e.: Fritz Fischer and the causes of world war one). Similarly, expectations can influence what we observe. Historians and scientists will jump to immediate conclusions with evidence that confirms their beliefs and overlook the evidence that goes against them. Finally, in both historical and scientific explanations, the observe effect is present whenever attempting to clarify an event. Furthermore, problems of bias also exist with both types of explanations. As human being we are all different from one another and tend to perceive what will justify our beliefs and not those of others. No explanation can be completely true or a correct account events or factors, as someone else will always have a varying account. In conclusion, historical and scientific explanations differ regarding their nature but they both emanate from observations. In addition, their purpose to both is to justify the beliefs of an individual regarding an event or factor. A scientific explanation will both be empirical and rational self-correcting itself through time whilst a historical explanation will only accommodate more viewpoints over time. Furthermore, they both present the similar methodologies to arrive at a theory or account of an event through the gathering of evidence. Finally, they are both subject to bias, observation problems and the scientists or historians' background. ...read more.