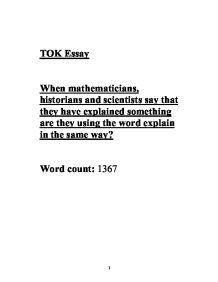 When mathematicians, historians and scientists say that they have explained something are they using the word explain in the same way?

TOK Essay When mathematicians, historians and scientists say that they have explained something are they using the word explain in the same way? Word count: 1367 In everyday language the term "explain" can mean many things, and is generally applied to prove something or make it more comprehensible. However on a more complex level it could mean many things, depending on the subject it denotes. It is therefore clear that it is very significant in the Theory of Knowledge. However, one must clearly establish the difference between making an idea easier to understand, and actually proving it. As we have seen in our class discussions, the "truths" acquired by different areas of knowledge are naturally different, it is therefore interesting to see what information is used, and what is meant by the word "explain" in different contexts. What could a mathematician imply by the word explain? Maths is a conceptual science which deals with abstract elements that are strategically arranged, so as to form a mathematical explanation or formula. However maths may also be considered as empirical, for children for example, using arithmetical building blocks to understand basic maths. We know maths is true, an independent of subjective experience, which is called priori. The theorem of Pythagoras works, and is positively "true", in Siberia and Tunisia, it was true in 1957 and will be true in 2010, this kind of math is global, and it isn't influenced by context. ...read more.

Most sciences, including history, explain something with a theory. Newer theories tend to be based on old ones, thus compounding any fault that may have been there to start with, and making the theory less reliable. For example: the Magnetic Field theory gave convenient, basic information on which one could then base many other explanations. So back to history, a historian is actually only giving a probable guess based upon as many clues as he can find, or has the time to delve into. Another question that should be asked is: what is or is not a science? "A science is considered to be the study of nature in relation to humans and the knowledge that we acquire through its study". This therefore would suggest that history is definitely a science, but that mathematics could be debated as not being. Some people argue that there are different types of sciences, such as social, natural and mechanical, (under which mathematics would fall). Mathematics is said to be a perfect science since there is no margin of error, unlike in history. To relate back to the question, when a mathematician says that he has explained something, he means that he has precisely proved a point based on the arrangement of elements and figures that can be reproduced over and over again. ...read more.

So we don't actually study or discover anything in maths, we apply maths to the physical world. Metaphorically speaking math is a jig-saw puzzle of which we have all the pieces, unlike in natural sciences where we are missing an unknown amount of pieces that are yet to be discovered. Biology as such is closely related to history, as it is strongly based on observation, such as through a microscope, animal behaviour in the field...etc This comes under part of an experiment, if a scientist hasn't witnessed what he is explaining, he has related the experiment of another, which may make it harder to believe him, without considering the eventual possibility that it could very well not be true. Therefore one could say that when a scientist says he has explained something he means he has put together a theory, backed up by his own previous knowledge, which he has used to set up experiments in which certain elements, through his own observation, seem to prove what he was setting out to prove in the first place. This kind of approach is very difficult to accept as a true explanation, as it's a self fulfilling process. He has chosen the experiment that will support his theory. So as any good Theory of Knowledge question, opinion plays a large part in the different definitions of the word "explain", depending on what you personally consider it implies, and what it relates to. ?? ?? ?? ?? 1 ...read more.