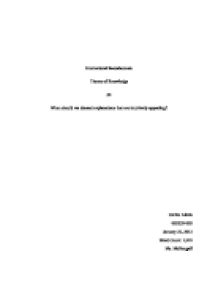 When should we discard explanations that are intuitively appealing?

International Baccalaureate Theory of Knowledge #4 When should we discard explanations that are intuitively appealing? Carine Alexis 003339-003 January 22, 2012 Word Count: 1,222 Ms. McDougall As we live our everyday lives, we are constantly forming our own opinions about what is going on around us. Naturally, when a person does not entirely know something, they tend to think of "a reason why", and these self-created explanations act as a type of knowledge. This tendency to form our own conclusions is intuition. Therefore, since intuition is a part of human nature, we should only discard any type of explanation when it is clearly wrong. Though, how can we truly determine when and if particular intuitive explanations are wrong? The only logical answer is that these explanations can only be "wrong" and discarded when they contradict explanations derived from other ways of knowing such as emotion, reason, and perception. Emotions are often the guiding force behind intuitive explanations. Then, are they perhaps too closely related to ever contradict each other? If this is true, then intuitively appealing decisions should not be discarded. Since intuition is often based upon a person's feelings about the world around them, it has a strong influence over every decision that is made. ...read more.

As humans, we tend to rely heavily on sense perception, particularly sight. I cannot count the number of times I have heard an individual say "I will believe it when I see it". More often than not, people only see what they want to see. Then, does perception lead us to incorrect explanations? Our perception can never be purely objective. For instance, when my sister and I reminisce about the past, we have differing accounts of what occurred and what was said. This does not necessarily mean that either one of us is purposely lying about these moments, but that the events were interpreted differently and time allowed these differentiations to increase. Likewise, when a crime is committed, eye witnesses are often questioned about what occurred and make a statement based upon their explanation of an event. These accounts are often used as evidence and a basis in court cases. However, an individual may fail to fully understand the circumstances of an event, much less an interaction between two unfamiliar people. A person's ability to retell events all depends upon their perception and understanding. For example, if someone playfully punched their friend's arm to emphasize a joke, a bystander could possibly misinterpret that playful gesture as a malicious one. ...read more.

For example, English philosopher John Locke formulated his theory of natural rights by observing the poor treatment of the common people. His intuition led him to establish an explanation about what people deserved, which in turn developed into a belief that every individual should be respected by the state. 3 In this case, this explanation grew into a theory that benefitted several cultures throughout history. Though, other explanations like these should be discarded if they blatantly ignore ethical convictions. If this is true, then who is to say which explanation should be discarded or not? Who is to say what is ethical or not? An intuitively appealing thought is always open to several interpretations. Though some explanations seem intuitively appealing, they are always limited due to the nature of humanity itself. Whether it is because of shortcomings in reason, emotion, or perception, the conclusions made are subjective, and therefore, incapable of applying to all aspects of a real life situation. If this holds true, then all intuitions have a possibility of being wrong. Then, should we discard or except everything that is intuitively appealing? The answer is simple: we should do neither. We should only discard explanations that are intuitively appealing when we are unwilling to face the consequences of being wrong, while not letting the fear of consequences keep us from experiencing life. ...read more.