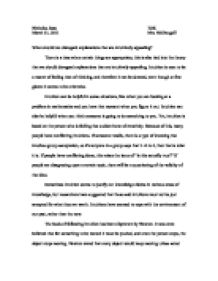 When should we disregard explanations that are intuitively appealing?

When should we disregard explanations that are intuitively appealing?

There is a time when certain things are appropriate; this is also tied into the theory that we should disregard explanations that are intuitively appealing. Intuition is seen to be a matter of feeling than of thinking, and therefore it can be skewed, even though at first glance it seems to be otherwise.

Intuition can be helpful in some situations, like when you are looking at a problem in mathematics and you have that moment when you figure it out. Intuition can also be helpful when you think someone is going to do something to you. Yet, intuition is based on the person who is feeling that sudden burst of creativity. Because of this, many people have conflicting intuitions. If someone recalls, there is a type of knowing that involves group acceptation, so if everyone in a group says that 2 +2 is 4, then that is what it is. If people have conflicting ideas, this raises the issue of “is this actually true?” If people are disagreeing upon a certain topic, there will be a questioning of the validity of that idea.

Sometimes intuition seems to justify our knowledge claims in various areas of knowledge, but researchers have suggested that these said intuitions must not be just accepted for what they are worth. Intuitions have seemed to cope with the environment of our past, rather than the now.

The basis of following intuition has been disproven by Newton. It was once believed that for something to be moved it must be pushed, and once the person stops, the object stops moving. Newton stated that every object would keep moving unless acted upon by a force. Our intuition would tell us that this wouldn’t be the truth, yet in reality and by the law of physics, this is true. Many of the popular ideas by physicists in the modern times are so contrary to the way that we perceive them.

We should also disregard explanations that are intuitively appealing when pertaining to biology and ethics. Approximately 200 years ago, it was thought that everything in nature had a purpose and since each species had its own unique essence, it could not evolve into another species. Darwin, who stated that species have gradually involved into other species, disproved this and that nature works blindly with no goal in mind. These hypotheses were widely accepted amongst biologists. There is problem with trusting our moral intuitions; different people at different times have different intuitions about what is right and wrong. At one point in time, African Americas were thought of as not being as highly ranked, socially, as whites. This is obviously changed now. It is impossible for us to predict what ideas are going to be like in the future.

One of the problems with intuition is that we tend to be overconfident about our intuitions. This is prominent in the field of social intuitions whereby we put a lot of trust in our intuitions about other people and we pride ourselves on being good judges of character. For example, when someone is lying, there is no way to tell whether the person is telling the truth or not, and so, even if we are judging them, we can’t accept that what they are saying is true.

Due to all of the above, we must disregard many of the explanations that are intuitively appealing because our intuition is flawed and therefore we must question the validity of it.