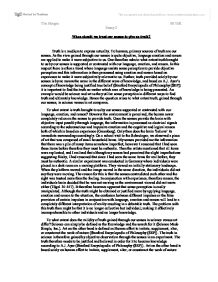 Truth is a medium to express actuality. To humans, primary sources of truth are our senses. As the view gained through our senses is quite objective, language emotion and reason are applied to make it more subjective to us. One therefore asks to what extent truth brought to us by our senses is supported or contrasted with our language, emotion, and reason. In this respect there is often a trend where language assists sense perception to provide objective perception and this information is then processed using emotion and reason based on experience to make it more subjectively relevant to us. Further, truth provided solely by our senses is by no means the same in the different areas of knowledge, and based on A.J. Ayer’s concept of knowledge being justified true belief (Stanford Encyclopedia of Philosophy (SEP)) it is important to find the truth no matter which area of knowledge is being presented.An example would be science and art as they utilize sense perception in different ways to find truth and ultimately knowledge. Hence the question arises to what extent truth, gained through our senses, in science versus in art compares.

To what extent is truth brought to us by our senses supported or contrasted with our language, emotion, and reason? However the environment is perceived, the human never completely relies on the senses to provide truth. Once the senses provide the brain with objective input possibly through language, the information is processed as electrical signals according to the subconscious and impulsive emotion and the cognitive and logical reason both of which is based on experience (Greenberg). Only then does the brain ‘believe’ its immediate surrounding accordingly. On a school visit to the Schaulager, we observed a piece of art that was composed of small household items. My senses provided me the information that there was a pile of many items somehow imperfect; however I reasoned that I had seen these items before therefore they must be authentic. Then the artists mentioned that all items were replicated, and I realized that although my senses had perceived the slight imperfections suggesting falsity, I had reasoned that since I had seen the same items for real before, they must be authentic. A similar experiment was conducted in Germany where individuals were placed in a dark room on a moving platform. They viewed an initially stationary landscape. When the platform moved and the image moved in the same direction, the individuals did not say they were moving. The reason for this is that the senses contradicted each other and the sight was trusted more than the feeling. In conjunction with experience, therefore reason, the individuals brain decided that he was not moving as the environment viewed did not move either (Tügel 14: 457). It therefore becomes apparent that sense perception is easily manipulated. Although the truth might be obtained or justified more by applying language, emotion and reason to the situation, the confusion between different impulses or the false provision of certain impulses in conjunction with language, emotion and reason will lead to a completely different interpretation of reality resulting in a debatable truth. The problem with this truth then might be that it is no longer collective but individual; making it effectively incomprehensible to other individuals and no longer knowledge.

To what extent does the validity of truth gained through our senses in science versus art differ? Science can simply be defined as the Knowledge and the search for it (Science Made Simple, Inc.). Art on the other hand is defined as Human effort to imitate, supplement, alter, or counteract the work of nature (Stanford Encyclopedia of Philosophy (SEP)). The truth in science is therefore gained by objective observation through the senses in an experiment. The truth therefore needs to be justified and believed in order for it to become knowledge according to A.J. Ayer (Stanford Encyclopedia of Philosophy (SEP)). Art on the other hand is based solely on human effort to imitate, supplement, alter, or counteract the work of nature  with something that is not the work of nature. This would mean it not to be true in the scientific observation as the latter means to make it knowledge. I saw a painting of the dripping clocks by Salvador Dali in an exhibition once and I knew that the image portrayed in the art would never happen in real life and therefore never be true, q.e.d. Knowledge and so, science. However, what I perceived was that the clocks were dripping and objectively speaking that could never happen but if I were to view the painting symbolically with the input of emotion an reason, I would notice that Dali was merely trying to indicate that time was dripping and was not concrete. This was in fact illustrating in a surreal untrue way one of Albert Einstein’s scientific theories about tine and gravity. Therefore it could be concluded that art is by no means untrue as it provides a visual display of scientific knowledge through manipulating our senses in conjunction with emotion and reason. As it must be true for it to be knowledge, even the abstract without placement in reality could be true.

There are historical examples of people that perceive their environment differently through a phenomenon or illness known as ‘voices’. People in this situation hear voices only they can hear, talk to them and to each other. Famous cases are said to include Mozart, Van Gogh and Andy Warhol (Tügel 14: 460). For these people, the voices are reality and the truth as they are perceived through their senses and utilize language as well as trigger emotion and reason. All of these famous individuals have dealt with the voices in the form of artwork. From the rational and scientific viewpoint of today’s society, the images and ideas they have are untrue as we do not perceive them, converse with them in the form of language og have them trigger emotions. But for these individuals, there was obvious detail in their work which could only be portrayed through exact observation of this changed perception. For them, these ideas and images were the whole truth and they could not experience any other reality. The truth therefore depends on the individuals sense perception, their use of language and their trigger of emotion along with their application of reason. On the other hand, the truth has to be reality to be considered part of knowledge. If the changed perception of these individuals compromises their ability to justify reality, their work of art or their expression of anything cannot be considered truth.

In conclusion, one questions to what extent truth is provided to us by our sense perception? In some cases, truth and reality is considered to be the same thing. Real, in terms of truth, is merely “electrical signals interpreted by the brain” (Fishburne). In that respect, sense perception provides us with the actual electrical signals, which possibly come from language, that then get interpreted on the basis of emotions and reason brought to us from former encounters with similar situations. However, this is our subjective interpretation of reality, possibly not the truth. This means that the senses do provide the individual with the truth of reality but the interpretation the individual makes of the perceived situation can be untrue as emotion and reason are used to interpret according to experience. This experience might not apply to the situation or make it unjustifiable resulting ultimately in the lack of truth. Then again, this situation would lead to every human having no access to the truth which is not the case. Meaning that as long as every person perceiving the same situation interprets the situation with the same emotion and the same reasoning it will be the truth. Truth consequently does not have to correspond to reality as long as it is accepted and understood by enough individuals to be of communicative assistance. In this regard, it is perfectly plausible to trust senses to provide truth as long as it is the general perception and not individually specific. The validity of truth gained through our senses in science versus art differs depending on the situation the individual is in. If the situation is very different from the reasonable norm in science or knowledge, the perception expressed by this individual might no longer be considered the truth by others whereas it will be to individuals with similar situations and experiences. If the art becomes more and more individual instead of collective, making the communication of the idea or picture subjective and no longer objective, it most probably would not be the truth based solely on sense perception. However if there is an input of emotion and reason in this situation the symbolism could carry the subjective abstract back to the truth. Overall, the senses should be trusted to provide the truth when perceiving real situations as emotion and reason based on experience only alter the reality expressed to us into a subjective possibly untrue interpretation. On the other hand, when perceiving a surreal situation, the senses portrait exactly that: the surreal, and so, the untrue. In this case we rely on emotion language and reason to interpret the situation back into the truth if the truth is what is required of us.