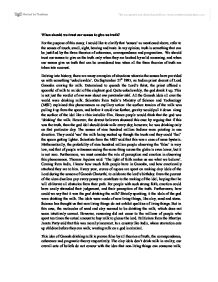 When should we trust our senses to give us truth? For the purpose of this essay, I would like to clarify that 'senses' as mentioned above, refer to the senses of touch, smell, sight, hearing and taste. In my opinion, truth is something that can be justified by the three theories of coherence, correspondence and pragmatism. We should trust our senses to give us the truth only when they are backed by solid reasoning, and when our senses give us truth that can be considered true when all the three theories of truth are taken into account. Delving into history, there are many examples of situations wherein the senses have provided us with something 'unbelievable'. On September 21st 1995, an Indian priest dreamt of Lord Ganesha craving for milk. Determined to quench the Lord's thirst, the priest offered a spoonful of milk to an idol of the elephant god. Quite unbelievably, the god drank it up. This is not just the verdict of one man about one particular idol. All the Ganesh idols all over the world were drinking milk. Scientists from India's Ministry of Science and Technology (MST) explained this phenomenon as capillary action: the surface tension of the milk was pulling it up from the spoon, and before it could rise further, gravity would pull it down along the surface of the idol like a thin invisible film. ...read more.

But, it happened again on 21st August 2006. Although Scottish philosopher David Hume said that the witness to an alleged miracle is more likely to be mistaken than the laws of nature falsified, with the same even occurring twice, there is something mysterious about this event. Certainly the probability of this case being attributed to mass hysteria again is very low, but there is no other plausible explanation. However Through the next three months, priests tried to feed the Ganesha a teaspoon of milk every day, but it seemed like his thirst was satiated. The scientific method follows a trend to find the answers. The trend was clear: the idols drank milk on only two occasions. In science they would be called anomalies. But then again, it is their senses that provided them with the knowledge. Maybe their senses were not providing the truth. Maybe Ganesh was drinking milk every day and their senses are deceived them. If the probability of all their senses being flawed on the day Ganesh did drink milk is low, then the probability of their senses being flawed on the day Ganesh didn't drink milk is also equally low. ...read more.

So, according to all the theories of truth, my senses were telling me the truth. However, I still cannot come to terms with it. If everything around us is matter made up of particles which we can see, how can we see ghosts? They are not known to be made up of particles, they are just energy. An old myth says that when we die, our soul escapes our body, which is why we lose exactly twenty one grams. The Paranormal Research Society has attributed this to ghost sightings, saying that the energy is the person's soul, and when it is powerful enough it crosses the realms of the world of the dead to enter the world of the living. If one concentrates one can see it and even talk to it. If that is indeed true, then I don't think my senses are telling me the truth all the time. There must be energies lurking around, which my senses do not seem to be able to pick up. In conclusion, many factors influence the perception of the knowledge that our senses give us. When deciding whether they provide the truth, it is best to consider the three theories of coherence, correspondence and pragmatism, and see if the senses are depicting the truth. (1589 words) ...read more.