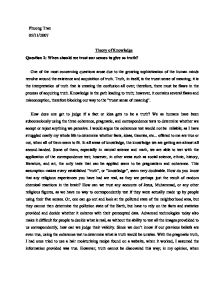 Phuong Tran 05/11/2007 Theory of Knowledge Question 2: When should we trust our senses to give us truth? One of the most concerning questions arose due to the growing sophistication of the human minds revolve around the existence and acquisition of truth. Truth, in itself, is the truest sense of meaning; it is the interpretation of truth that is creating the confusion all over; therefore, there must be flaws in the process of acquiring truth. Knowledge is the path leading to truth; however, it contains several flaws and misconception, therefore blocking our way to the "truest sense of meaning". How does one get to judge if a fact or idea gets to be a truth? We as humans have been subconsciously using the three coherence, pragmatic, and correspondence tests to determine whether we accept or reject anything we perceive. I would argue the coherence test would not be reliable; as I have struggled nearly my whole life to determine whether facts, ideas, theories, etc... offered to me are true or not, when all of them seem to fit. In all areas of knowledge, the knowledge we are getting are almost all second-handed. Some of them, especially in natural science and math, we are able to test with the application of the correspondence test; however, in other areas such as social science, ethnic, history, literature, and art, the only tests that can be applied seem to be pragmatism and coherence. ...read more.

We being humans, have, to some extent, only a limited ability to fully perceive and acknowledge the "real world". I personally believe in the aquatic ape theory for the human evolution; and I would argue that during the time when we haven't envolve into "humans" yet, our perception of reality would greatly differ from the one we have now, perhaps due to less capable eyesight. Or when we look at "solid" object, a chair, if one takes into account the fact that the neutrons, protons and electrons of an atom actually have huge spaces between them it becomes clear that the atoms that make up seemingly solid objects are made up of 99 % empty space. When so-called solid objects are seen in this light it becomes apparent that they can in no way be the seemingly solid objects they appear to be; and I would say these seemingly solid objects are more like images that we interpret as solid objects based on our imperfect perceptual conclusions. The human mind perceives and interprets, reality is what we make it and we can make it what every we want, a glass half full or half empty, we make our own realities based on what we allow ourselves to see, and usually we have a very narrow view. ...read more.

Truth, therefore might exist only on a personal level, as communication between humans has not reached the level where all thoughts and knowledge and be exchanged effectively. Human's conception of reality is different from any other species', due to the differences in our senses, just as the differents emotions, cultures, past experience affects each individual's senses, causing each human's perception of reality to be slightly different. Also, in my opinion, the only truth that humans care capable of obtaining is his own emotional state. Otherwise, we are not yet able to acquire universal truth due to the limitations of our senses and our biases in acquiring knowledge. Some believe that reality exists outside and independent of our senses and we are bound by our own perception of reality believing it is the truth, when in fact reality can be something completely different; other opinions state that it doesn't really matter if reality exists or not when we cannot perceive the truth to begin with. What is clear is that perception is never reality, it is the interpretation, or appearance of reality perceived by human senses; and it differs from person to person to a certain degree; therefore, we are incapable of obtaining universal truth. Word count : 1597. ...read more.