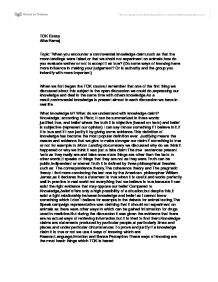 When you encounter a controversial knowledge claim,such as that the moon landings were faked,or that we shold not experiment on animals,how do you evaluate wether or not to accept it as true? (Do some ways of knowing have more influence in making your jud

TOK Essay Alba Ramaj Topic:`When you encounter a controversial knowledge claim,such as that the moon landings were faked,or that we shold not experiment on animals,how do you evaluate wether or not to accept it as true? (Do some ways of knowing have more influence in making your judgement? Or is authority and the group you indentify with more important) When we first began the TOK course,i remember that one of the first thing we discussed about this subject is the open discussion we could do,expressing our knowledge and deal in the same time with others knowledge.As a result,controversial knowledge is present almost in each discussion we have in real life. What knowledge is? What do we understand with knowledge claim? Knowledge; according to Plato; it can be summarized in three words: justified,true, and belief where the truth it is objective (based on facts) and belief is subjective (represent our opinion).I can say i know something if i believe in it,if it is true and if i can justify it by giving some evidence.This definition of knowledge has become the most popular definition ever. Justifying means the reason and evidence that we give to make stronger our claim if something is true or not for example:In Moon Landing documetary ...read more.

true fact were strong and convicing in the masses,it can be mentioned the sky without stars,the wind which caused the movement of the flag, the movement of sand particles while the austronauts walked,the video which showed that Moon Landing was created in a studio or to show that USA gained against USSR.But still the fact that the trip to Moon is continuing in present,the live transmittion of Moon Landing in all the TV and the fact that USSR didn`t oppose it,make the claim that Moon Landing is true stay stronger as well.In both claims we should use reasons to justify them.As Descartes believed the only way to achieve certainity and knowledge was to follow the path of reason.But the evidence given created a moderate scepticism which represents a non extreme scepticism,it simply holds that we cannot be sure that any of our beliefs are true.There were people that believed that Moon landing was fake,other thought it was true and others were sceptic.The phenomenon of justifying your beliefs and your knowledge claims by using reason it is called rationalism.People can say that Moon Landing was true maybe because they might be Americans and they want this to be true.This way of knowing it is called emotion.But people who used to ...read more.

stop the experiments on them for the only reason that there was no other solution to develop science; by using 100 animals can be saved 100000 human lifes; science was trying to find the right formula through computers system and at the moment that this would be achieved experiments on animals would stop automatically.Basically,what was he trying to say was that animals are important,but not as important as humans and that we need these kind of testing to prevent any catastrophic health situation within us.The boy convinced the masses,and as a my conclusion i think that rationalism,reason is more convincing and stronger than emotions in n knowledge claim. Sense perception is also one of the most important things in TOK.Knowledge gained throught observing and experimenting which is tightly related to sense perception. The problem is that our senses,can be not accurate (optical illusions); as a result all we gained through sense perception can be wrong and we can be sceptic about what we know. But i must highlight that it is too difficult to use one of each way of knowing when you argue,usually they are found mix,reason mixed with emotion,language and sense perception.The most important question that remains is:`how can be sure that we know what we know?` ...read more.