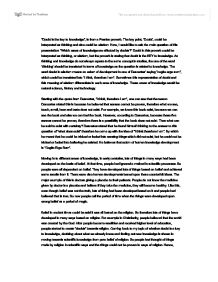 Which areas of knowledge are affected by doubts?

"Doubt is the key to knowledge", is from a Persian proverb. The key point, 'Doubt', could be interpreted as thinking and also could be wisdom. Here, I would like to ask the main question of this presentation: "Which areas of knowledge are affected by doubts?" Doubt in this proverb could be interpreted as thinking, or wisdom, but the proverb is stating that doubt is the KEY to knowledge. As thinking and knowledge do not always equate to the same concept in studies, the use of the word 'thinking' should be translated in terms of knowledge as the question is related to knowledge. The word doubt in wisdom means an axiom of development in one of Descartes' saying "cogito ergo sum", which could be translated into "I think, therefore I am". Sometimes this representation of doubt and this meaning of wisdom differentiate in each area of knowledge. These areas of knowledge would be natural science, history and technology. Starting with the quote from Descartes, "I think, therefore I am", one can see that the reason Descartes stated this is because he believed that senses cannot be proven, therefore what we see, touch, smell, hear and taste does not exist. ...read more.

These thinking have made radical development in science. Radical development could have appeared because scientists doubted false demonstration created by the religion. It was possible because doubt in science had used as a method to prove false knowledge is false. For Example, Galileo Galilei had proven a false of thinking that was produced by religion. He had proven that the earth orbits the sun. He could have made a major role in the scientific revolution with the heliocentric theory. This theory was not accepted because people had believed the Ptolemaic theory at that time. Galileo Galilei could have died because he had assisted heliocentric theory. It is now proven that Galileo Galilei was right but it was denied from religion. Later, it was proven by other person again and heliocentric theory could be said as a true theory. Strong belief in early centuries kept away the scientific revolution in finding knowledge. Also, for many years, there have been lots of debates of creation and evolution. The debates are about recurring theological and cultural-political dispute about the origins of the earth, humanity, life, and the universe. ...read more.

Technology is change of paradigm. Here is the graph of development in technology. Just to make sure, this graph is not drawn in scale. See these parts where the lines are not connected to each other, these are called paradigm. The technology we use and the technological skills we have are not developed by doubts. For example, in the olden days, TV was in black and white. The process between having black and white and inventing colour TV was not created by doubt. John Logie?? Baird??? who invented colour TV did not doubt in invention of black and white TV to invent colour TV. It was just the process of new invention but this is not due to any doubts. Finally I conclude my presentation. Even though this counterclaim argues that the doubt is not the key to knowledge, however, I believe that doubt does act as a key to knowledge. I think that if someone was to prove something wrong, then doubting about something will be the first step needed. As you won't know if something is wrong or not, without any doubts of right or wrong. So next time you want to prove something new, go start doubting. ...read more.