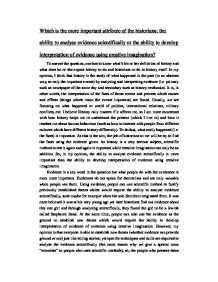 Which is the more important attribute of the historians; the ability to analyse evidence scientifically or the ability to develop interpretation of evidence using creative imagination?

Which is the more important attribute of the historians; the ability to analyse evidence scientifically or the ability to develop interpretation of evidence using creative imagination? To answer the question, one has to know what's his or her definition of history and what does he or she expect history to do and historians to do to history itself. In my opinion, I think that history is the study of what happened in the past (in an abstract way, so only the important events) by analysing and interpreting evidence (i.e. primary such as newspaper of the same day and secondary such as history textbooks). It is, in other words, the interpretation of the facts of those events and process which causes and effects (things which make the events important) are found. Usually, we are focusing on what happened to world of politics, international relations, military conflicts, etc. I believe History only matters if it affects me, so I am more concerned with how history helps me to understand the present (which I live in) and how it teaches me about human behaviour (such as how to interact with people from different cultures which have different history differently). To do that, what really happened (i.e. the facts) is important. ...read more.

This can also be implied that people who are interested in history may treat History as a really complex and long story, as entertainment, then, the aim of history will be different again. In extreme cases, to some people, the aim of history is solely to provide leisure time activity as those people may expect, then, the ability to analyse evidence scientifically will be completely futile. That means Dan Brown can be a historian if he wants for those people, all he has to do is move his books from the "fiction novel" shelf to "history" shelf. Yet, I think this does not support why people first start with the word history, yet those people can think like that if they want to. However, cultural difference can make people's response to this question different. If the cultural difference is that the view on the aim of history or even history itself is not the same, then historians are expected to do different things which will mean different ability is needed. For example, the Japanese who are shameful of its malicious and sinful history which shows their evil nature do not wish to accept history as the study of really what happened. Rather they wanted a "story" which would make them feel better about killing millions of innocent people (i.e. ...read more.

It may take longer but Psychologists may find that Hitler's mindset has certain special qualities and then the Historians can try to prove or disprove what the Psychologists say. I mean, it is irrational to leave whole of the Past to historians while we have tens of natural sciences and social science to due with the Present. Historian's job should only be proving or disproving, just like scientists on a different area of knowledge. After all, as I mentioned before, my expectation for history is to try to find facts which are true. I also agree with Mr Dawkins' view that nothing, not even my own imagination, can convince myself about anything being wholly true, yet science can convince me that at least by far it has not been proved wrong and that many people are trying to prove theses wrong making it quite easy and quick to expose those wrong theses established. In conclusion, I think the ability to analyse evidence scientifically is more important than the ability to develop interpretation of evidence using creative imagination. It is because the ability to analyse evidence scientifically is relatively more pragmatic, creative imagination may sometimes be required in history not historians, creative imagination is also unpredictable, unexplainable and unreliable. However at the same time, I do recognise creative imagination may come handy occasionally and that views and values are affected by cultural difference. Word count: 1331 ...read more.