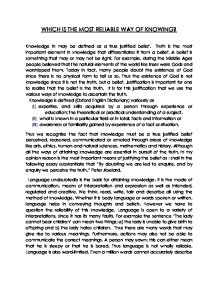 Which is the most reliable WOK?

WHICH IS THE MOST RELIABLE WAY OF KNOWING? Knowledge in may be defined as a true justified belief. Truth is the most important element in knowledge that differentiates it from a belief. A belief is something that may or may not be right. For example, during the Middle Ages people believed that the natural elements of the world like trees were Gods and worshipped them. Today in fact, many people doubt the existence of God since there is no physical form to tell us so. Thus the existence of God is not knowledge since it is not the truth, but a belief. Justification is important for one to realize that the belief is the truth. It is for this justification that we use the various ways of knowledge to ascertain the truth. Knowledge is defined (Oxford English Dictionary) variously as (i) expertise, and skills acquired by a person through experience or education; the theoretical or practical understanding of a subject, (ii) what is known in a particular field or in total; facts and information or (iii) awareness or familiarity gained by experience of a fact or situation. Thus we recognize the fact that knowledge must be a true justified belief perceived, reasoned, communicated or emoted through areas of knowledge like arts, ethics, human and natural sciences, mathematics and history. ...read more.

"A fool sees not the same tree as the wise man sees."-William Blake. This gives rise to the problem of perception. Different people see and perceive different ideas, objects and items differently, leading to varying beliefs. Perception is basically awareness of things through our five senses; touch, taste, smell, sight and sound. Though perception guarantees first hand experience, it falls shorts of true justification due to its relativity in most cases. "Every man takes the limits of his own field of vision for the limit of the world"-Arthur Schopenhauer. This means that while perception is indeed a way of attaining truth, it is in many cases illusionary. What may seem right to you may not be the real case and the world may not agree. In this context it often leads to 'believing is seeing'. For example in the nineteenth century, some scientists speculated an unknown planet Vulcan between the sun and Mercury. Bearing this, some astronomers claimed to have seen Vulcan. Yet later no such planet was formed. Thus perception involves a bias and individuality. Emotions involve feelings, passions and moods. Love, anger, jealousy, hatred, disappointment and frustration are all emotions. "We think and live in one world; we live and feel in another." ...read more.

An impatient person may come to a conclusion at a hasty pace, in spite of using analysis. Also the world is under constant change, thus conclusions based on reason defer as times change. Yet in spite of all these setbacks, reason undoubtedly pursues truth more than any other way of knowing. Fir example there is no actual night or day, but part of the earth away from the sun experience darkness and the part facing the sun experiences light or day. This is deduced through reason. Yet perception shows darkness and light accounting for day and night, emotions make us feel the difference in the environment at night and day and language tells us the difference. But reason alone tells us the truth in the similarity and contrast existing between night and day. Similarly though the sun seems to move in the skythis is not the truth. In actuality it is the earth that revolves around the sun. Reason has justified so, with the help of satellite pictures and analysis. Yet perception tells us something contradictory. Thus we may conclude that the extent we can rely on reason as a way of attaining knowledge is much more than any other way of attaining the truth i.e. emotions, language or perception for "Information is acquired by being told, while knowledge is acquired by thinking, reasoning." Fritz Machlup. ...read more.