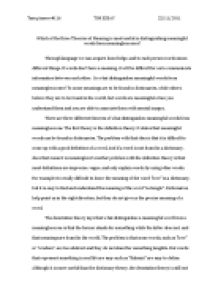 Which of the three Theories of Meaning is most useful in distinguishing meaningful words from meaningless ones?

The problem is that some words, such as ?love? or ?wisdom?, are too abstract and they do not stand for something tangible. But words that represent something in real life are easy such as ?Bahrain? are easy to define. Although it is more useful than the dictionary theory, the denotation theory is still not the best way to distinguish meaningful words. The most useful theory out of the three is the image theory. It states that the meaning of a word is the mental image it stands for, and when you have the appropriate concept in your mind then it is meaningful. How meaningful the word is depends mostly on the context it is used in, and this theory is the only one that acknowledges this, because mental images change depending on how the word is used. ...read more.

To some, a word can mean many different things, while to others the same word may not mean anything at all, so is this word meaningful or meaningless? The answer is neither no or yes, because it depends on whether the word stands for a mental image. It also depends on the context in which the word is used. For example ?I ate a funny song?, although the word ?ate? is meaningful, in this particular context it does not make any sense and therefore is meaningless. In conclusion, although the image theory is the most useful in distinguishing meaningful words from meaningless words, it still has its limitations. Therefore a combination of the theories is required because we cannot depend on only one of them. ...read more.