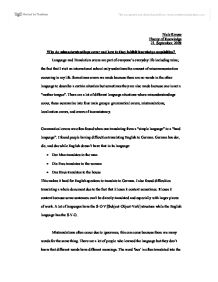 Why do misunderstandings occur and how to they inhibit knowledge acquisition?

Niels Krause Theory of Knowledge 21. September. 2009 Why do misunderstandings occur and how to they inhibit knowledge acquisition? Language and Translation errors are part of everyone's everyday life including mine; the fact that I visit an international school only underlines the amount of miscommunication occurring in my life. Sometimes errors are made because there are no words in the other language to describe a certain situation but sometimes they are also made because one is not a "mother tongue". There are a lot of different language situations where misunderstandings occur, these summarize into four main groups: grammatical errors, mistranslations; localization errors, and errors of inconsistency. ...read more.

It loses it context because some sentences can't be directly translated and especially with larger pieces of work. A lot of languages have the S-O-V [Subject-Object-Verb] structure while the English language has the S-V-O. Mistranslations often occur due to ignorance, this can occur because there are many words for the same thing. There are a lot of people who learned the language but they don't know that different words have different meanings. The word 'bus' is often translated into the word 'tram' which of course is not the same thing but because one is not a mother tongue they don't know that. This happens in English a lot because different English teachers come from different cultures and so they use different words for the same thing. ...read more.

This is of course the wrong translation from the government and the media. This translation had two big problems the first one being that the translation was basically a description and that it meant nothing to the uneducated people in India. This was of course adopted by the media and made into advertising campaigns sponsored by the government. This increased the confusion by a lot. In areas such as medicine and law errors localization errors, mistranslation errors and grammatical mistakes can be fatal. Those areas can inhibit knowledge acquisition a lot because they influence my everyday life a lot due to the fact that i'm going to a international school and it influences the life of the average person because the world is becoming more international and people are moving around a lot introducing new products and new costumes into different cultures. (Word Count: 542) ...read more.