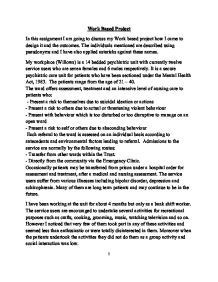 Work Based Project In this assignment I am going to discuss my Work based project how I came to design it and the outcomes. The individuals mentioned are described using pseudonyms and I have also applied asterisks against these names. My workplace (Willows) is a 14 bedded psychiatric unit with currently twelve service users who are seven females and 6 males respectively. It is a secure psychiatric care unit for patients who have been sectioned under the Mental Health Act, 1983. The patients range from the age of 21 - 40. The ward offers assessment, treatment and an intensive level of nursing care to patients who: - Present a risk to themselves due to suicidal ideation or actions - Present a risk to others due to actual or threatening violent behaviour - Present with behaviour which is too disturbed or too disruptive to manage on an open ward - Present a risk to self or others due to absconding behaviour Each referral to the ward is assessed on an individual basis according to antecedents and environmental factors leading to referral. Admissions to the service are normally by the following routes: - Transfer from other wards within the Trust. - Directly from the community via the Emergency Clinic. Occasionally patients may be transferred from prison under a hospital order for assessment and treatment, after a medical and nursing assessment. The service users suffer from various illnesses including bipolar disorder, depression and schizophrenia. Many of them are long term patients and may continue to be in the future. I have been working at the unit for about 4 months but only as a bank shift worker. The service users are encouraged to undertake several activities for recreational purposes such as crafts, cooking, grooming, music, watching television and so on. However I noticed that very few of them took part in any of these activities and seemed less than enthusiastic or were totally disinterested in them. ...read more.

One could argue that these patients' behaviours are due to their illness however it could also be that their sexuality is purely perpetuated by boredom. The Ward manager told me that it would be a risk for me to do an activity with both Mrs E and John at the same time however it states in the UKCC Guidelines (1998) that "Patients (including those with learning disabilities and/or mental illness) have as much right as any other individual to express their sexuality within the confines of the law, either as an individual or within an encounter". However because nursing/medical staff assess 'whether or not the patient has was deemed capable of giving informed consent prior to any incident occurring' their right is rarely exercised. Some patients were disorientated during the interviews because of their medication; therefore some interviews had to be done again whereas some took longer than expected. I was very pleased when I found that majority of the service users had responded during the interviews and also had an interest in exercise and games which would be activities that would be beneficial to their wellbeing. A disadvantage to using semi structured interviews is that of "varied responses, resulting in varied results" (Bryman, 2000). In this case I was fortunate to have responses that were fairly similar and the main objective of realising that there was actually a need had been proven correct. I then visited the patients in their rooms and made sure to remind them of the project, the reasons I was doing it and finally the majority results that had come from it. Again the service users who actually had an interest in the games and exercise were happy to hear the news but the other service users were of course not pleased but I assured them that I had shown all their comments to the Ward manager for consideration even though I was not sure as to whether she would even give a glance. ...read more.

This is in turn puts pressure on the many NHS funded hospitals and psychiatric units to keep up standards and not go over their budgets. This is reflected in the way the ward manager runs the unit and may give reason to as to why she refused the recreational activity chosen by the service users because of factors such as the funding to buy equipment, the time and effort in doing the risk assessments for each and every patient who takes part and also the allocation of staff. Care vs control is also a major issue as I found it hard to interview some patients because of the medication that they had received which made them drowsy and rarely alert. The nursing staff may sometimes give medication to the patients before the allocated time 'so that they don't act up' or when they are being aggressive than usual. Healthcare workers need to take into account that it may be possible for the service user may be upset about something and may be lashing out just as 'normal' people do. Conclusion There are a number of factors which work together to strengthen the case for giving greater priority to evaluation in the planning and delivery of services for people with mental health problems. "The inclusion of users' perspectives in the evaluation of mental health is increasingly seen as a way of giving a marginalized group more of a voice"( White and McCollam,1999). However this is much easier in theory than it is in practice. Many psychiatric patients continue to need long-term care in institutions in the public and private sector, despite the development of community facilities. Long-stay psychiatric institutions vary in size, level of security, facilities and type of care provided. Patients are usually regarded as long-stay if they are in an institution for more than a year. Inevitably, many long-stay in-patients experience limitations to their freedom, personal choice and activity, usually compounded by a low income and relative isolation from the community. ...read more.