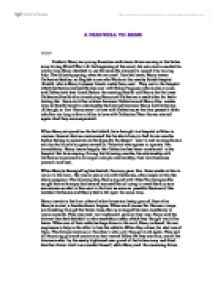 A Farewell to Arms - plot outline

A FAREWELL TO ARMS PLOT Frederic Henry is a young American ambulance driver serving in the Italian army during World War I. At the beginning of the novel, the war continues.And its winter time.Henry decided to use his leave.He planned to spend it by touring Italy. The following spring, when he returned from his leave, Henry meets Catherine Barkley, an English nurse who Works at the nearby British hospital .Rinaldi who is Henry's closest friend, made them meet . They met in the hospital which Catherine worked.He also met with Helen Ferguson who is also a nurse and Catherine's best friend.Before the meeting Rinaldi told Henry that he loves Catherine.Rinaldi after introducing Henry and Catherine to each other he had a feeling that there could be relation between Catherine and Henry.Few weeks later as Rinaldi feared a relationship had started between Henry and Catherine .Although, at first Henry wasn't in love with Catherine,as the time passed it didnt take him too long to him to fallen in love with Catherine.Then the war started again. And they were seperated. When Henry is injured on the battlefield, he is brought to a hospital in Milan to recover. Several doctors recommend that he should stay in bed for six months before having an operation on his knee.But he doesn't want to wait so long.So as a solution he found a surgeon named Dr. ...read more.

Miss Catherine Barkley is Frederic Henry's love interest in this novel. She is English and serving as an assistant nurse for the British hospitals in Italy. She originally joined because she was following her fiancee to war. He died a year before in France. Catherine loves Fred deeply.She is supportive when he leaves the Army and flees with him to Switzerland, carrying their unborn child. She is a loving, dedicated woman whose desire and capacity for a redemptive, otherworldly love makes her the inevitable victim of tragedy. Catherine is beautiful and possesses, perhaps, especially her hair is very beautiful. Rinaldi - He is a surgeon in the Italian army. Rinaldi is Henry's closest friend. They are also roommates. Rinaldi is an unbelievable womanizer, professing to be in love with Catherine at the beginning of the novel but claiming soon thereafter to be relieved that he is not. Where the priest is concerned with higher values ,Rinaldi prefers immediate pleasures. Helen Ferguson - She is also a nurse who works at the American hospital and a dear friend of Catherine. At first she is fine with Catherine and Henry's relationship,after a long time because of her unhappiness she become paranoid about her friend's safety and anxious about her own loneliness and started to disapprove the love affair between Henry and Catherine strongly. ...read more.

The United States joined the Allies late in the war. Germany was forced to pay grave reparations at the end of the war, as written in the Treaty of Versailles. Many scholars believe this may have been one of the largest contributing factors to World War II. Gorizia: The city in which Henry is stationed throughout most of the book. He was at the front in the world war one.And its also the city where he used to live. San Gabriele: An Italian offensive that fails miserably. Milan: The city in which the American hospital is located. This is where Henry spends his time after his injury.Also the place where Catherine and his relation become serious. Stresa: A Northern Italian town that very close to Switzerland. Its the place which Henry went to see Catherine right after he get away from the war. Montreux: The Swiss city where Henry and Catherine spend their life with waiting for their child to born. Theme:Never give up your whole life for someone.Because when one day he or she leaves you will stay alone and without having anything to do. Mood: The novel has tragic and unhappy and desperate mood until the middle of the book because of the world war.But in the rest of the book although the war contiunes Henry and Catherine stays away from the war so there is a more exciting and happy mood until the tragic end. ...read more.